Molecular gastronomy is defined as a type of food science that utilizes physical and chemical transformations of ingredients to create meals and drinks that are shown in a new light. While the art form first started out as a food science, it has slowly grown into an aesthetic in design as the focused transitioned more from science to art.

The name molecular gastronomy itself was first used in 1988 by a physicist named Nicholas Kurti and chemist Herve This. The method of researching how food was made was first brought into the public light in 1992 when Kurti and This held workshops to discuss the science in food preparation. Initially this was a very scientific exploit as it was focused on how the cooking of food worked rather than how to make it new.

In the late 1990’s chefs began to explore molecular gastronomy as a style of food rather than just a science. In this form chefs such as Hestor Blumenthal, Wylie Dufresne and Richard Blais have taken molecular gastronomy from a science to an art form as they explored new ways of creating food.

Molecular gastronomy portrays a design aesthetic in a variety of ways. The dishes are generally small and elegant. Attention is paid to the attraction to the eye through bright/contrasting colors and shapes not traditionally associated to food. The chefs focus on creating art on the plate and put a lot of though into the presentation of the dish.

In addition to the visual appearance of the food, molecular gastronomy strives to recreate one’s favorite dishes and put them in a way you could never imagine having them before. For example, see the eggs benedict pictured below. Traditionally this dish consists of a poached egg placed on top of canadian bacon and an english muffin and then covered in hollandaise. In this recreation the bacon was transformed into a chip, the egg yolk into a gelatin, the hollandaise into a fried ball, and the english muffin into a powder. This creates a dish that, when looked at, appears nothing like what one imagines it should.

It is within this idea of creating something new that molecular gastronomy lies. It is all about making the taste buds and brain argue about a plate of food that could be considered an art piece in and of itself. It is about the presentation and utilization of the senses to give the diners an experience unlike any they have had before. 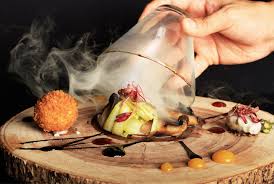