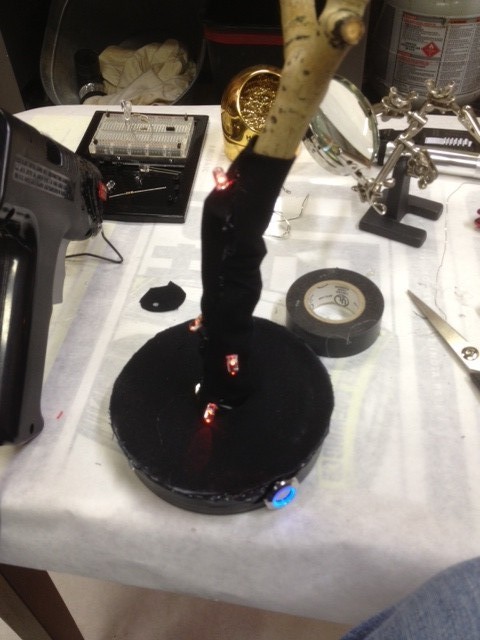 I love aspen trees, and I thought that using them to make some sort of decorative light would be really neat. I started by gathering a bunch of fallen aspen branches and logs on a hike up by Nederland High School. I didn’t want to cut anything off a living tree because firstly that would be rude, and secondly, I wouldn’t know how the branches would act as they dried. As I discovered while loading the dead branches into the car, the thin ones are very, very brittle. I had wanted to gather a small bunch of branches together and wind LEDs and some thin silver colored wire around them. Unfortunately, the branches are way to delicate, and I knew I’d probably break them all just in the process of wiring the thing.

While trying to figure out what to do with the branches, I wired up my circuit. I got some cycling RGB LEDs and an awesome button on Sparkfun.

I decided that I would try to make a tepee looking structure with the branches and put the LEDs inside. For the base, I cut some circles out of foam core and glued them together. The plan was to cast the base out of aluminum. I’ve had a bucket furnace (the idea came from Grant Thompson – “The King of Random” on YouTube) for about a year, but I never really had much success casting anything other than randomly shaped ingots.

I got the furnace started, and it took about 3 hours to get enough metal liquid enough to pour. The one I’ve got isn’t great, it’ll need to be rebuilt if I actually want to make something out of metal in a reasonable amount of time.

I covered the foam core base with Plaster of Paris, buried it in sand, and poured the molten aluminum in. As usual, the metal didn’t melt the foam of the actual part I wanted. All I got was the sprue; it was a perfect replica, but I would have preferred the base. Oh well.

I improved a base by using a plastic lid of an old jar that was laying around. After I got the circuit wired up to one of the shorter branches, I attached it to the base. I hid the wiring with some scraps of fabric left over from a sewing project. So for now, the lights work, and the whole thing stands up. I’ve got a big pile of sticks to attached all around the base to hide as much of the black plastic as possible. I think it’ll look nice when its done.