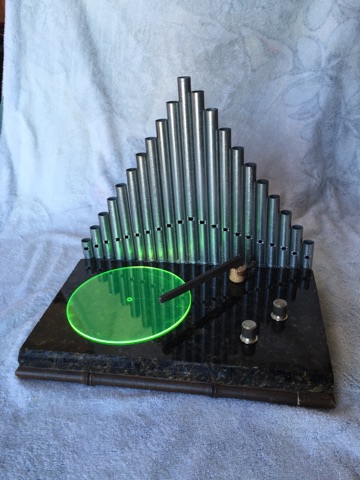 My upcycling project began with a trip to the ReSource scrapyard and a faint idea for a sculpture design.  I quickly realized that my idea would have to change due to the available material constraints.  The brainstorming cycle became: “what could I possibly create with this material?”.  Many items would inspire an idea and ensue a scavenger hunt for other parts to fit that design.  One such idea included a “junkyard” car, inspired by a piece of duct work that reminded me of the blowers you see on racing cars.  I found some neat parts to add to the design but eventually aborted the idea due to lack of supporting materials.  I also explored parts that followed a surrealistic aesthetic which I covered in my first blog post.  Eventually, I returned to the same piece of duct work that reminded me of a blower.  However this time, I connected it with looking somewhat like a gramophone horn (old-timey record player).

As a collector of vinyls, I thought a gramophone sculpture design would be great.  A moment later, I saw some steel pipes which sparked the idea to cut them at different lengths to create a church organ aesthetic instead of a gramophone horn.  I combined the ideas to design a record player with organ pipes set behind the spin platter.  After browsing further, I found a piece of granite and “bamboo” shelving to make the base from.  In total, I purchased four five-foot steel pipes, a piece of granite, and the wood shelving for around $7.

My aesthetic intent was not clear at this point, but I believed that the combination of granite, “bamboo”, steel, and a record player would make for a thought-provoking piece.

Using the materials listed above, the design plan was to cut the steel pipes at varying lengths to create a classic church pipe organ aesthetic such as the one seen here…

The length of the granite allowed for twenty-one pipes to be lined along the back.  I decided to make the center pipe 12″ while the pipes to the right of the central pipe would descend in 1″ increments from 11.5″ to 2.5″ and the pipes to the left would descend in 1″ increments from 11″ to 2″.  This staggered effect follows the pattern used in pipe organs to produce different notes.  I cut the pipes using a bandsaw, then used a grinder to smooth the pipe ends.  In order to really convey the pipe organ aesthetic, though, I decided to mill a “mouth” into each pipe using a 7/32″ bit.  Actual pipe organs have a concave portion above and below the “mouth”, but the machining for this feature would have been very difficult.  Also, organ pipes taper towards its base.  Due to the form of the steel pipes I purchased, this was not possible either.

Since the bamboo shelving was much to long for the intended design, I had to cut the piece to fit the length of granite using a table saw.  I made another cut to take the finished edge from the extra material and attached it to the cut piece using wood glue.  The granite slab was stacked on top of the bamboo wood shelving and attached with adhesive.  In order to create the turntable, I used a laser cutter to fashion a 7″ diameter neon green piece of acrylic.  For the tone-arm, I used an old wrench and attached a paperclip segment to the end to imitate the needle.  Lastly, I borrowed two knobs from an old receiver.

As mentioned before, the design loop for the project was heavily constrained by the material available at the scrapyard.  Therefore, it looked something like this…

This design loop seems to follow the nature of the process for upcycling to make art.  If the design was meant to be functional or dynamic, the design loop would of looked much different.

This project sought to create art for the sake of art.  There was never a clear aesthetic in mind; however, I believe the juxtaposition of the nostalgic and retro record player with the grandeur of the pipe organ creates an interesting piece for discussion.  The design allows for broad interpretation, dependent on one’s relation to music and perhaps the church or religion.  The glowing effect of the neon green acrylic contrasts the muted brightness of the natural materials.  It almost makes the sculpture “come alive”.  While this effect was unintentional, I believe it adds an essential flavor to the piece.  The organ pipes and record player setup embody sentiments of the past– the “glowing” acrylic embodies the progressive evolution of music.  Pictures of the final design are below…