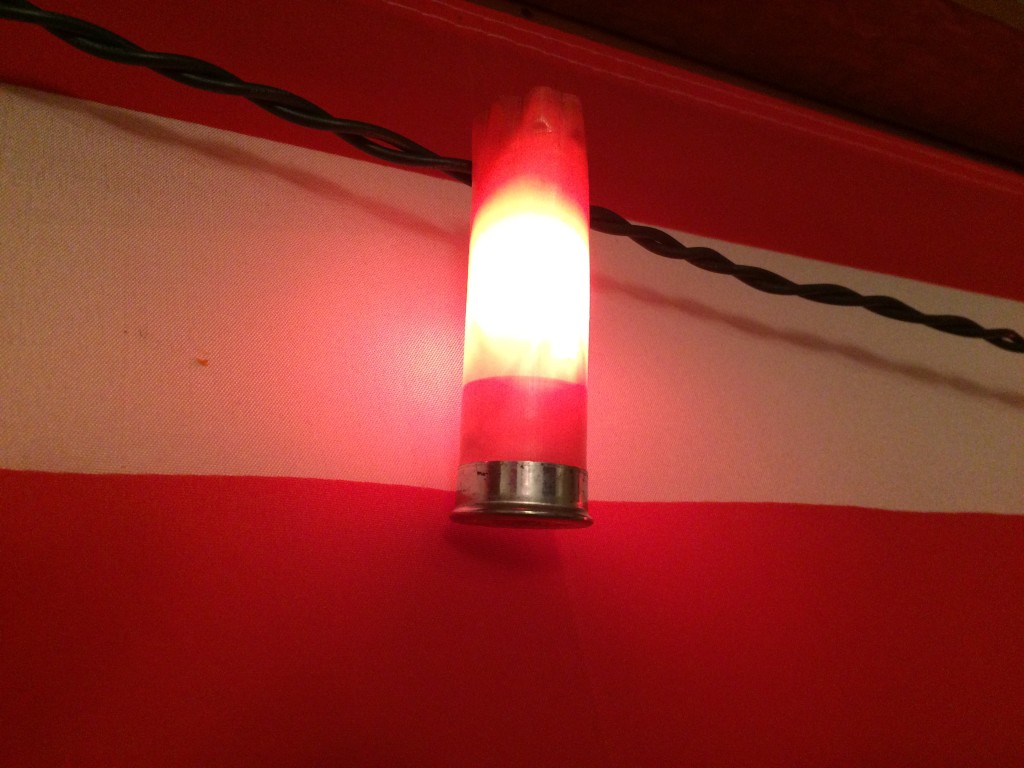 After some exploration and creative thinking, I ended up creating a string of shotgun shell lights. I based my project strictly around using empty shotgun shells. I initially thought of creating art for art’s sake and using the shells as the border or outline. I also thought about using the brass to make drink coasters but was inspired by an old strand of Christmas lights hanging in my room to go the direction I went. The idea started after watching the movie Chef and noticing the classic chili pepper lights hanging in a restaurant used in one of the final scenes of the movie. I then thought if it would be possible to connect the shells to the lights in my room to emulate the red chili pepper lights and give my First Navy Jack a nice set of American shotgun shell lights.

First I took the old set of Christmas lights down

Then I took the led bulbs on the light strand and pressed them into the cut out.

Once I pressed the entire green backing into the cut out I would pull back on the strand to basically seal the cut out making it extremely difficult to the the light out due to the way I made the cuts.

Finally I hung the lights back up where I originally had them hanging over my flag for a sweet extra twist and nice color of red lighting.

As I mentioned before, my vision originally was art for art sake and using ammo in an artistic way. I have seen many creative ways to reuse shells and casings for art such as jewelry, sculptures, and art (such as a painting or image). But I have also seen ammo used for more functional reasons such as a .50 cal shell turned into a bottle opener. This was my biggest inspiration since it added an aesthetic to a common item while reusing an old item for another function. When I came across my idea it was the perfect fit for both artsy and functional.

In the end I was extremely happy the way it turned out. I was worried about the way I attached the lights if it would look natural and show off the shotgun shell enough where people noticed but I think it turned out well. If I had more time I would explore other ways to attach the shells using glue or a heat gun to reshape the plastic/wax/clay casing around the bulb rather than cutting through it. It may or may not turn out better but it would’ve been interesting to try. I hope to use other shells to try and make a few bottle openers next and plan on using a laser cutter and 3D modeling to design them and continue to reuse old ammo shells for other functions.