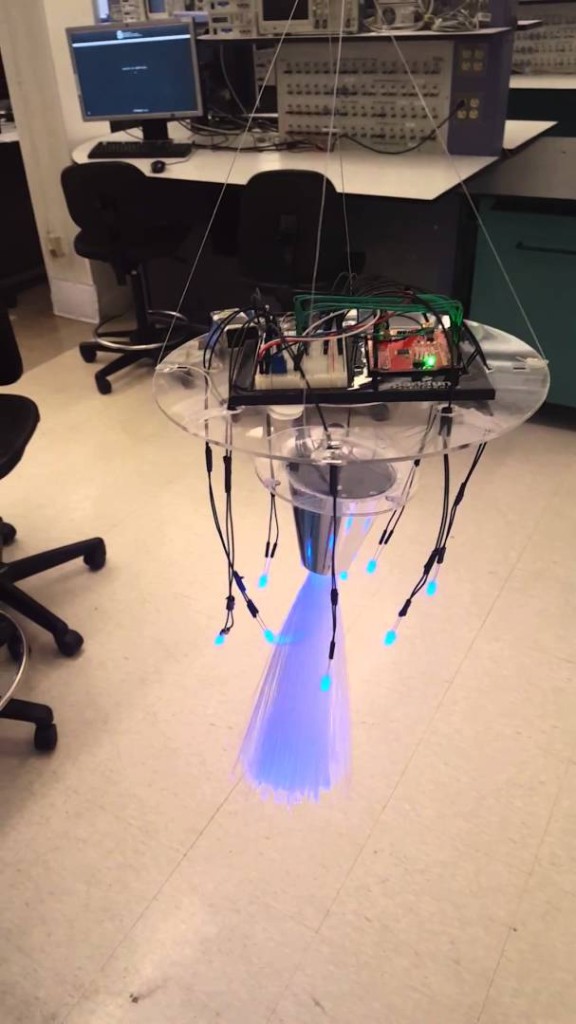 My original idea was to make a fiber optic chandelier, but it turns out that my design is starting to look more like a jellyfish, so I have decided to turn it into a fiber optic jellyfish. I have finished assembling all of the main components of the project. I went in and saw Tim May, who helped me a ton on this project. I was able to get the circuitry all working with the Arduino and I got some extension cables so that I could have the LED’s hang below the base.

Pictured below is my arduino board set up with the extension wires and blue-colored LED’s. I also bought a power cable from Tim so that I could simply attach a 9V battery to the power supply to run the LED’s.

Shown below is the main mounting set-up. I used a laser cuter to cut the top base and then hung the fiberoptic below it with fishing line. I then drilled some small holes into the acrylic circle scrap material from the laser cuter and glued it onto the base of the fiberoptic.  I rubber-banded the fiberoptic cable to make it easier to work on the base.

Below you can see the functioning fiberoptic jellyfish with the arduino running and the fiberoptic turned on as well.

Here is where I am up to date. A fully functioning fiberoptic jellyfish. Tim May helped me create a switch to turn the LED’s on and off, and overall I like how it turned out. I have learned a lot in this project from Arduino to the laser cuter and how to solder and connect everything. All I would like to add is a dome-shaped cover for the electrical components, to make it look more like a jellyfish, however, I would like it to be transparent so that the electrical components can be seen through it, which gives it an electrical/engineering aspect that I like. I am also thinking of adding in more LED’s into the actual arduino board so that they can light up while under the dome!