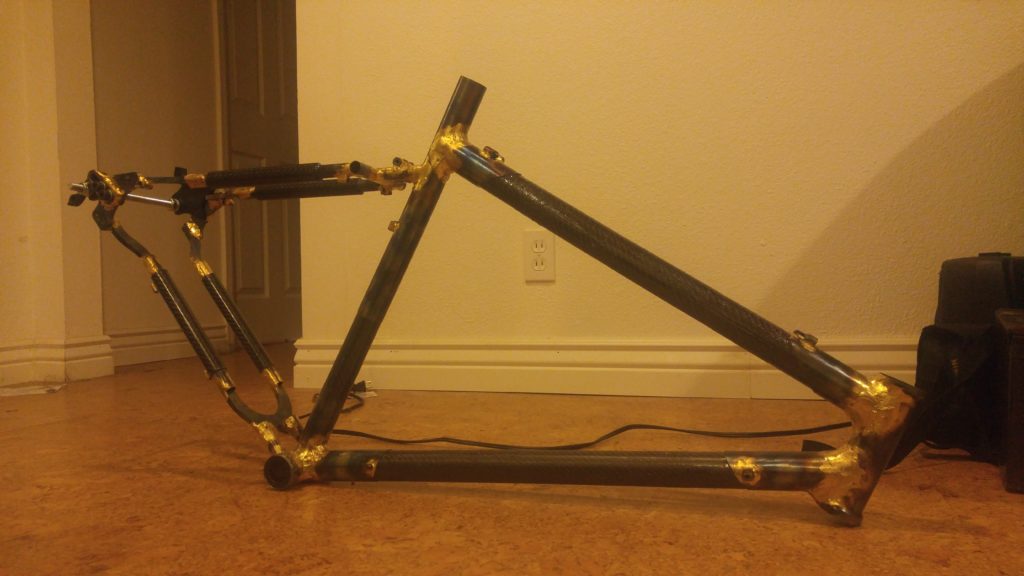 Lugged Carbon Frame: What and How

Blog: Final Project Report: What and How. Overall description and photos, then details of what you have made: CAD drawings, fabrication description, costs vs budget, etc.

The frame is finally all assembled. At this point, all the remains before it can be built into a operating bicycle is curing of the epoxy, some finishing work and paint. After that it will have to have the bottom bracket retapped and the seatpost reamed.

The jist of it is a long distance 29er mountain bike. The top tube is unusually short for an upright riding position and accommodation of drop bars. It has disc brake mounts, sliding dropouts and down tube shifters as an option.

First, the geometry was researched. Past experience and the decisions of other manufacturers lead me to decide upon a geometry. This geometry was drawn up in a sketch book, and the angles and tube cuts were determined by hand.

After spending approximately 100 hours on calculations, the tubes were all machined. I found a critical error in my calculations, and the process was repeated, this time in solidworks.

This geometry was largely the product of other smaller computer models, and was constrained by the geometric fitment needs.

These were machined up from 4130 steel.

For making the carbon fiber, I took carbon weave sheets, impregnated them with MAX1618 epoxy, wrapped them around a bicycle inner tube and pumped this tube up into a PVC pipe. The first sets of these tubes were instron tested to verify that they would hold up. This bike is quite over built.

The steel pieces were brazed together, stripped of excess oxide and borate, and torch blued.

The various steel assemblies were connected with carbon tubing. The aerospace adhesive Loctite e120HP Hysol was used. It was a shear strength of over 4000 psi, and was tested to perform closer to 3000 psi with my application.

Geometrically and structurally speaking, the lower tubes of the frame provide the most important role. This starts at the head tube, and runs down the down tube towards the chain stays and dropouts. The lower assembly was made first, that is to say. Each mate was sanded and cleaned with 5 or more runs of degreaser.

The down tube was connected to the bottom bracket. After this cured, the head tube and chainstays were affixed. This was followed up with the dropouts, which were bound by a provisional axle.

The intersection of these tubes was measured to determine how to braze the last lug. I would hate to braze it according to my calculations, and find that errors in my tube straightness and the like had made my final lug worthless.

That leaves us with this. An old style lugged carbon frame with even older style gun bluing. All with modernized component compatibility. I suppose in the end, with it’s 1800s retro-futurist aspect, it’s a steampunk bike. I personally was leaning a bit more techno cowboy than Victorian England, but the brass really dominates.

There are some finishing touches. I want to refinish the carbon fiber and clear coat it. After that, just needs to have parts fitted to it.

This just completely fell apart. I was determined to finish and to do it right.