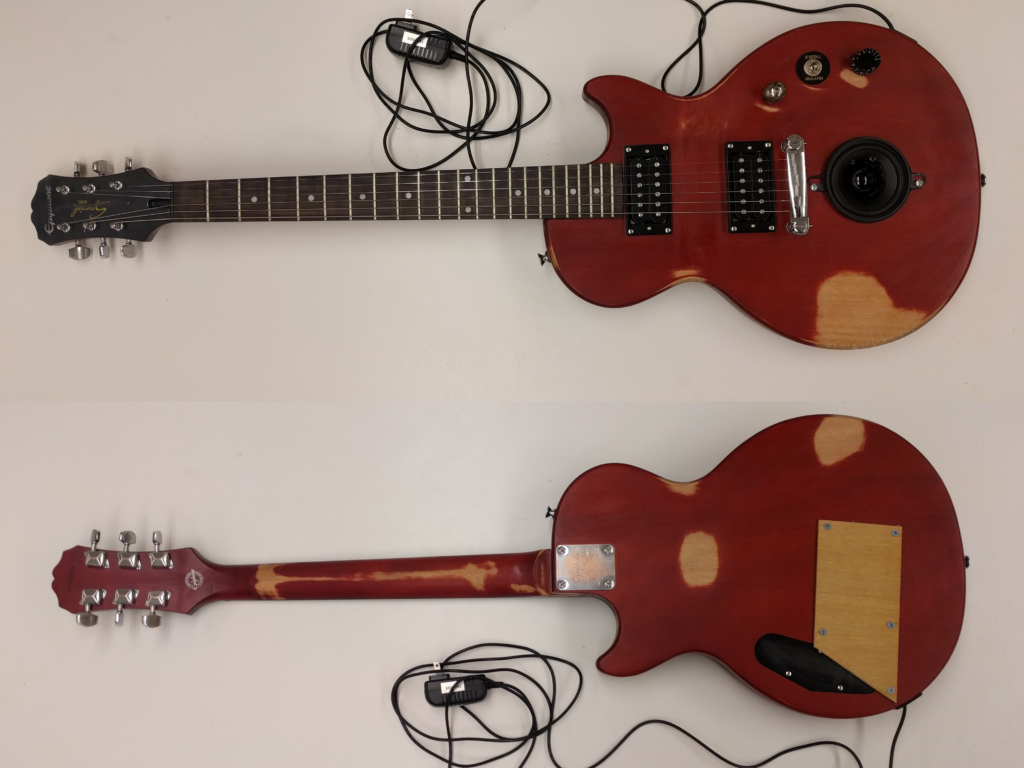 Road Worn Speaker Guitar (What and How)

I initially set out with the intention of building a speaker into an electric guitar in order to allow the user to have the guitar’s sound amplified to listenable levels without the use of a typical amplifier.  This problem is often solved using mini battery powered amps that can clip to the users belt.  I desired a more compact solution and one that would not require batteries.  Additionally there was the problem of the aesthetic.  I stated in my initial blog post that I am very fond of the way high quality items age over time acquiring scuffs and stains that all tie back to the memory of their creation.  This impression is often faked in the film world and I decided to try my hand at faking it for this project.  I eventually took to calling this aesthetic “road worn” without realizing that googling this results in almost exclusively images of guitars and other instruments.  Despite this I believe this aesthetic could be applied to a great many objects, especially clothing, cars, and recreational objects such as skateboards.  The key to the aesthetic is for it to minimally impact the object’s functionality as this would lead to needing a replacement rather than continuing to make use of the old beat up one.

Setting out to build a speaker into a guitar and then make it look “road worn” I knew there would be three main phases of the project: Electronics, Mounting, and Aesthetics.  Each phase brought its own fun and challenges and would ultimately lead to a product I am quite happy with.

Firstly there was the electronics.  I knew from the start that an amplifier would be required to drive a speaker.  Typical guitar amplifiers typically make use of two amplifiers.  The first is the “pre-amp,” used to boost the sound slightly but also to shape the sound.  This is often what gives different amplifier brands their characteristic sound.  Second comes the “power amp,” which serves to boost the output of the pre-amp to speaker driving levels.  In investigating how to build a simple amplifier I came across a very popular compact pre-amp designed by Donald Tillman.  This design is compact enough to be built into the end of a typical instrument cable which makes it perfect for integration into a guitar.  A Sparkfun breakout board was used as the power amplifier.  Although, I was initially hesitant about the electronics side of the project; it turned out to be very straightforward.  There were minor issues typical of electronics projects but overall it went together very quickly.  Once built I was able to drive the speaker but only at very low volumes.  I decided that this was likely due to the lack of an enclosure and would be helped by mounting it into the guitar.

The next step was to create cavities in the guitar body for mounting the speaker and electronics.  This proved to be the most difficult part of the project due to my inexperience working with wood tools.  Luckily Josh Colyer in the IDEA Forge Makerspace was happy to help.  Cutting a 3″ hole for the speaker was the first challenge.  The speaker I had chosen was almost exactly the thickness of the guitar so the hole would have to be straight through.  To do this I cut it with a hole saw from both sides of the  guitar meeting in the middle.  Next the hoe needed the edge beveled slightly to help the speaker fit properly.  This was done with a router, but because of the knobs and pickups on the top surface of the guitar the router did not have space to operate properly.  To rectify this a template was cut with holes for all of the interfering features giving the router a flat surface to rest on while cutting.

With the speaker mounted a path needed to be created between it and the guitar’s existing electronics.  This path needed to have enough space to hold the solderable breadboard containing the amplifier circuits.  This path was also cut with a router and can be seen below.  Once the cavities were there it was a simple thing to wire the breadboard to the speaker and guitar’s output.

With all the electro-mechanical work done it was time to move on to the aesthetic.  In order to understand what actual road worn guitars look like I looked through many pages of google images trying to identify places that saw the most and least wear.  It became clear that the neck and fretboard saw some of the most wear along with the area around where the strings are strummed and where the right hand of the guitarist might rest while not playing.  To actually do the weathering I sanded the areas with various grits of sand paper.  Areas that were to look the most worn were started with a coarse grit and worked up to a fine grit sandpaper while the whole guitar received light sanding from the fine grit.  The hardware actually has given me the most trouble.  Sanding it did help to scratch up the chrome but in some cases also transferred some of the red body color to the metal.  Once thoroughly sanded the guitar was physically abused by hitting it against cymbals as well as making cuts with a large knife to rough up the edges.  I also made use of some guitar picks I had that had left colored streaks on one of my guitar’s pickguards to scruff up the areas around the strings.  Finally, I added a piece of scrap wood to cover the additional electronics and speaker.  I can’t decide if this adds to or takes away from the aesthetic but I hoped that this would help to give the speaker a proper enclosure to help it be loud enough.

My estimated budget was $140.  I had not accounted for the cost of the power supply or the shipping of any components in this estimation.  Ultimately the whole project ended up costing $163.54 which is just over the 15% contingency that I should have applied to the original budget estimate.

Once the work was completed I was finally able to plug in the guitar.  Unfortunately, even with the added enclosure, the speaker was much too quiet.  It was noticeably making sound, even the correct sound, but it was quieter than the unamplified strings.  One interesting thing is that adjusting the volume control causes the speaker to make a sufficiently loud fart-like sound.  At this point I was able to determine that the Sparkfun power amplifier simply did not output enough power to drive the speaker I had chosen.  Moving forward I will likely begin looking for a more powerful amplifier or build my own power amp that can drive the speaker.  Until then I have a very interesting but purely aesthetic product to play with.