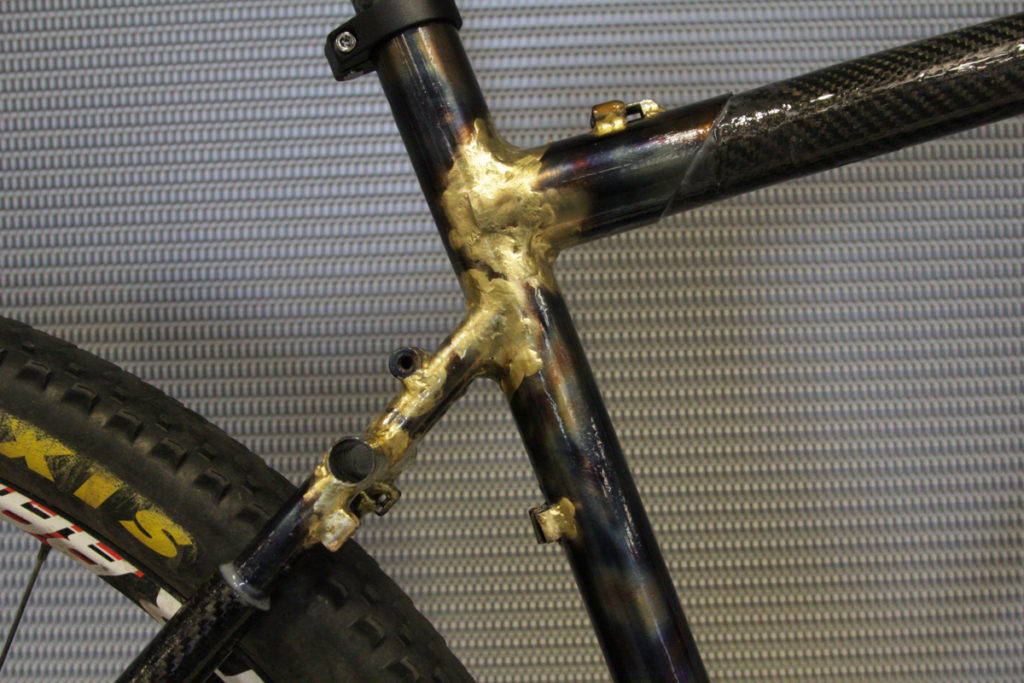 The future of the Carboner

Final Project Report Continued: Why and What next? Reflection on the semester. Compare your original project intent to what you ended up with. How did the public react? What did you learn from your project, and from the class? What will you do next with the project? What do you wish you had done differently?

With the bike built, there are some things that remain to be known, and some things I would outright have done differently. From an aesthetic perspective, I could have brazed cleaner. I think that having a larger tip would have helped on the big stuff and a smaller tip on the small stuff, but ultimately, I think I could have practiced my heat control more before I started. Also, the use of a paste flux would have helped control the run a lot.

The epoxy I used to join carbon to steel was an opaque white, and while it was not highly visible at first, its presence is exaggerated by the clear coat. Some of the joints look milky white. This should have been sanded first. Secondly, the clear coat did not go on as smooth as I had hoped. It will either have to be powder coated to sprayed on next time.

All in all, I’m glad I made a lugged carbon frame, but future practice will probably be plain steel.

Another hard lesson what that I originally wanted to do the chain stay yoke out of bent steel. I probably figured out how to bend steel a few days ago only. Too late!

When it comes to geometry, I pretty much go exactly what I wanted. Unfortunately, what I wanted was a little misinformed. The mountain bikes I based my suspension geometry on have their geometry measured without suspension preload. I based my bike, which doesn’t have suspension, on the resting geometry of these bikes. I should have added a degree to head tube angle to compensate. Also, in achieving my geometry, things ultimately would have gone a lot faster with a master jig.

Finally, I wish I had tested my chain stay design on the instron. I was so preoccupied with carbon fiber that I never tested the way that I mated the plate steel to the tubing. Never fear, I’m planning on testing this retroactively. The results of the test will determine how I ride this bike.

Public reaction was mixed, as expected. No one cares about bikes, unless they already do. People who are into bikes pull me aside to talk about it. Mechanics look at it slack jawed. As for the general public, it really has to be shoved in their faces. They can appreciate the blued steel and carbon, but they have to be told where to look.

As for what I learned from the project, it seems almost futile to list. Everything. I learned setup, about brazing, thermal expansion, carbon layup, adhesive mechanics, steel chemistry, instron testing, bicycle tube fitment, machining, mold making, subcontracting, finishing and a bit of marketing. I also learned that the exorbitant price of custom bike frames should be higher.

My plan going forward is to build a fork in this style, master brazing and contract out custom carbon tubing. I think that in a couple years, with an engineer income, I’ll be able to do this better and faster. Probably knock a full pound off the frame weight.