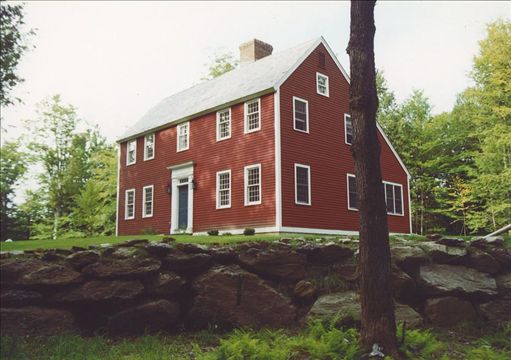 I was born in Annapolis, MD, and have lived there my whole life. My move to the University of Colorado was my first time moving to a different part of the country, and there were some differences that I almost instantly noticed. One of the main differences in they way people live her is in fact what they live in! The aesthetic that characterizes many houses back home is all but nonexistent here, so I thought I’d discuss what makes this aesthetic, as it is probably something most here have not had much exposure to.

Above is a saltbox house; I would estimate almost 50% of the houses in my neighborhood are of this design type. It is characterized by a two story front section with a steep roof that in the back extends much farther, only offering room for one story in the rear of the house. This was originally done for functional reasons: as families grew and needed more space, the easiest way to add more space to a traditional two story rectangular house was to add a lean-to on one side. This minimized the need for additional materials, and kept the roof profile steep to ensure deep snow could not build up on top of the house and cause a collapse.

The other traditional style of housing is a cape-cod style house. This style is characterized by a rectangular, one story house with a steep, symmetrical roof. A second story or loft is usually placed directly under the roof, and occasionally dormers are added to allow for the addition of windows. There are almost always shutters, because high winds and subsequent flying debris is characteristic of a coastal storm. Below is a very simple cape-cod style house, while below that is a slightly more elaborate design with dormers and a garage, and below that is a variation of the design called a gambrel-roof. The gambrel roof maximizes area of the second story while keeping the amount of shallow-sloped roof to a minimum.

The design of traditional east-coast houses was originally functional but is now mostly an aesthetic. Advances in construction materials/techniques have made houses stronger, thus rendering most of the design elements unnecessary. A house not built in close proximity to the coast, especially one socked in by trees or a mountain, is not typically subject to very high winds. And a house further south is not subjected to such high snow loads. However, the design lives on as an aesthetic, a style which many find cozy, homely, traditional, and in many instances the way a home should look. Below is the William Paca house. Paca was a signer of the Declaration of Independence and Maryland’s third governor; he was certainly wealthy and could have embellished his house with more grandiose design features (columns, rotundas, etc.) but designed of his residence in adherence with custom.

All pictures are from Google Images.

Information contributing to this blog post came from the Historic Annapolis and the Classic Colonial homes website.