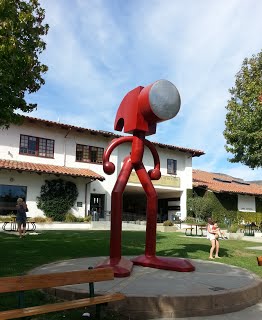 One of the most common things that is thrown away in my house of seven people, is cans. Whether its tin cans from food goods or various beer cans from many different brands. I began collecting them as soon as I heard about this project but did not yet know what I wanted to do with them. I came up with the idea to re create a statue I remember seeing in a park when I was a little kid. It was about a 15ft foot tall, all red, all metal rendition of a hammer with arms and legs. This statue called “Big Red” by Ed Benavente is much to big to re create in its original size so I plan on making a smaller scale model completely out of beer cans and beer boxes.

I will be trying to achieve the aesthetic of beer logos/cans. I have seen many small trinkets, toys etc… that are made entirely out of beer cans so that is what I am going for. The cylindrical shape of the can is perfect for the arms, legs, hands and feet which is where I got the inspiration for the material from. The head will have to be made out of beer boxes due to its flat sides.  I will be using a dremel, hot glue and some scissors/pliers as tools. The goal is to make a rendition that not only clearly resembles the real piece but also stands on its own. Here’s what I have so far….

I will be cutting the cans at various angles to try to achieve a seamless fit. We will see how it turns out!