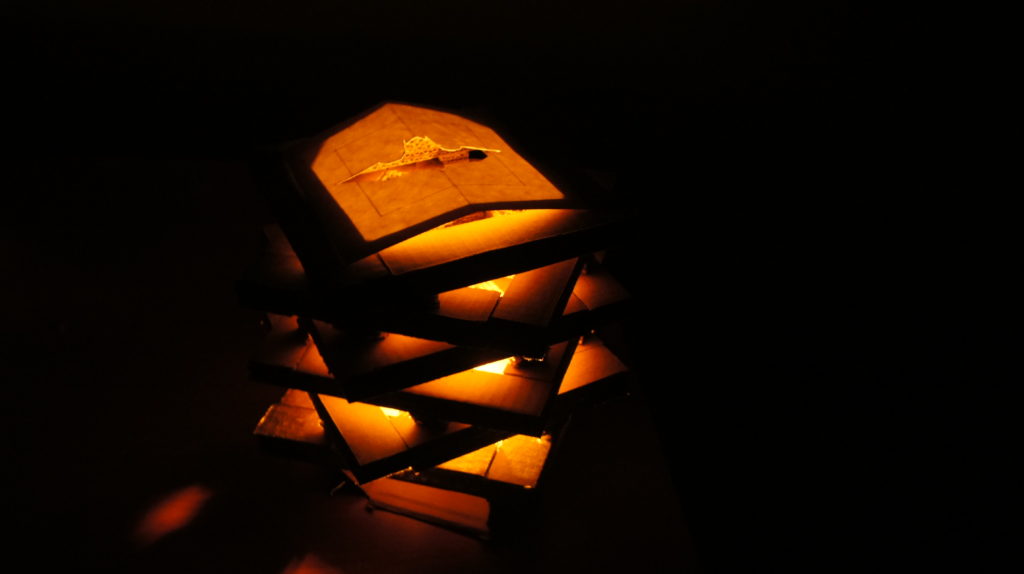 With this lamp in mind, I started sketching up ideas for my lamp and decided I would make the design shown on the below sketch. An LED light bulb would be placed in the center of the blocks while the blocks may be mounted on a turn table.

The Aesthetic I was looking to achieve is the scattering of light effect by the corrugated edges of the cardboard. The rotation of the cardboard blocks could also produce the effect of a disco lamp only without the colors. Although I couldn’t completely achieve my set aesthetic goal, I improvised during my build process to end up with a rather not so different aesthetic.

My goals for this project would be to create a lamp to use during the night without disturbing my sleeping roommates and also look cool while doing so.

Perhaps the major change from my ideal design process for this project would be the selection of raw materials. As an engineer, I’ve been trained to choose a material for my design rather than design for a chosen material. However this being an upcycle project, finding a raw material to make something out of it would become one of the initial steps of the process. Also, the limitations of the materials I had, lead to a few extra steps during the process.

The bat symbol was an afterthought upon finishing the assembly of the layers as I felt this would give a better feel instead of having a simple square opening at the top.

The bulb could be replaced with a larger and better one to form a uniform pattern of light from the lamp. Adding a couple more blocks of cardboard layers can also help render a clearer and better bat symbol without much diffraction of the light which is the case now.

Here’s a video of my presentation at class.