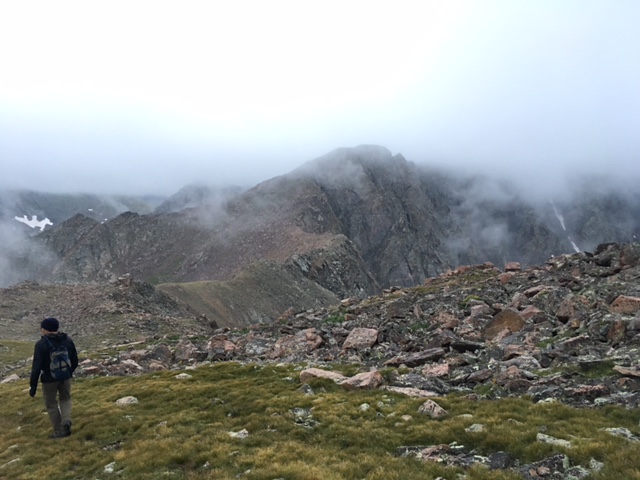 Mount of the Holy Cross is one of the fourteen 14,000 foot mountains in the Sawatch Range of Colorado. The mountain looms above  ‘The Bowl of Tears’ at 14,011 feet. I’ve had the opportunity to visit this mountain two times. On my first visit my partner and I got stuck in a storm near the peak before getting lost in a thick fog and struggling to find our way back to the trailhead without summiting the mountain. On my second visit I was able to enjoy the beauty of the mountain and summit the 14er before any Colorado thunderstorms chased us off the peak. The Mount of the Holy Cross is one of my favorite mountains and is the inspiration behind my upcycle project.

After deciding I wanted to make a model of the Mount of the Holy Cross I had to figure out how. While trying to figure this out I wound up seeing a Broncos design my friend Keaton made which I thought had a rad aesthetic that I would be able to apply to my mountain. Here is Keaton in a Bronco’s jersey holding the cardboard Bronco:

A topographic map proved to be a vital asset in creating the model. I drew parallel lines on a topographic map and everywhere the drawn line crossed a contour line I drew a point which correspond to a point on a piece of cardboard. I used these points to outline several pieces of cardboard which I then cut so that they could add up to create the mountain.

Another difficulty I ran into was making the model accurate in the horizontal direction. The vertical direction was simple, I had a topographic map showing elevations of various features on the mountain. Horizontal scaling was much more difficult and I settled for simply making the model a close match to the mountain as developing a scale and using it would have been extensive and beyond the scope of this project since my goal was just to create a piece of art – not a perfect map or model of the Mount of the Holy Cross.

Scaling also proved to be problematic. While the topographic map allowed me to scale the vertical aspect of my model, I had difficulty relating the vertical and horizontal scales. As a result my model looks far steeper than the actual mountain.

While initially I planned on making the model a solid piece I realized I could make it transportable if I made a base piece that the parallel mountain cut outs could slide in and out of. I did this easily by taking left over cardboard and cutting evenly spaced slits into the left over cardboard so that each mountain cut out could slip in and out of each slit – now I could easily transport the model and quickly assemble it!

Although I am happy with the final product and I achieved my goal of creating a cool looking model of the Mount of the Holy Cross there are somethings I will be changing in the future. Perhaps the biggest change I will make is making the model solid. I would do this by wrapping the mountain in paper mache which would completely change the aesthetic but would make my model a lot more like a solid 3D map. I could even draw contour lines on it and make it a 3D topographic map which I think could be awesome!

If you would like to know more about my project, feel free to watch this live presentation I gave on it:

insert video of the thing

References: All photos were taken by yours truly