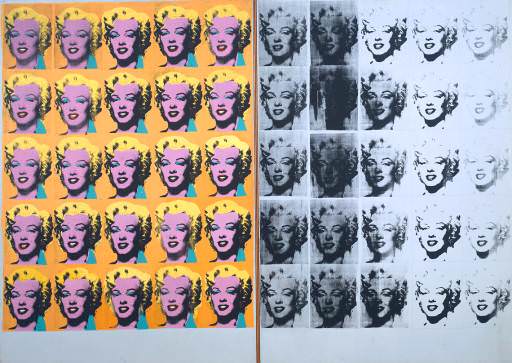 The 20th century design movement that is best embodied in my final project is pop art, a genre lasting from 1958 to 1972 that first emerged in Britain.  This movement is characterized by a rainbow of colors, expressive forms, repetition, and vivid patterns.  Furthermore, this genre often incorporates well-known personalities such as Marilyn Monroe, comics characters, and a wealth of consumer products such as Campbell’s soup or Coca-Cola bottles.

Warhol was often inspired by mass produced advertisements and consumer goods.  Likewise, I have been inspired to create my hologram final project based on well-known iTunes and iPod advertisements featuring silhouettes against bright pinks, greens, purples, and yellows.  These bright colors and use of people are also key design features associated with Andy Warhol and his works.

An example of the type of advertisement I will be using is shown below.

Other pop design applications are shown as follows.

If I were to project other 20th-century design movements on my design, they might look like the following drawings.  The first sketch represents Art Nouveau, the second represents Organic Design, and the third represents Bauhaus Design.