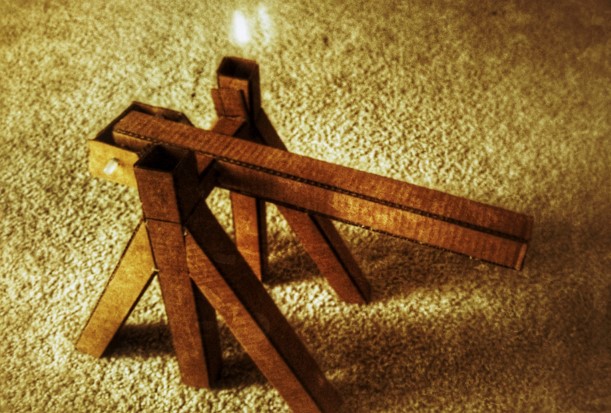 For this project, I’ve decided to make a scaled model of one of the siege engines used during the medieval ages – the trebuchet. The trebuchet is a siege weapon that were used to hurl huge boulders at enemy castles and walls at a distance of about 300 meters away during battles. The trebuchets were considered superior to other siege weapons during its period because of its long-range abilities.

I’ve decided to scale the size of the trebuchet to about a feet tall to make it look like an artifact while retaining its core functionality. The aesthetic I am looking to achieve is to make the trebuchet look like its been in a number of battles. I’d like to achieve a worn out look to the wood I’d using to make the trebuchet. Some other ideas are to include some sword cuts and arrow edges. I’d really like to invoke a sense of war on looking at the trebuchet. One more suggestion that came out during my presentation is adding a crest and flag. These could also be incorporated into the design.

For the prototype, I made a simple mock-up with cardboard to test out the scale of the final product I want to make. The total height of the prototype was about a feet tall. I could not bring out the aesthetic I was hoping for with a cardboard model. So I need to start working on wood as soon as possible and start testing out my aesthetic goals soon.