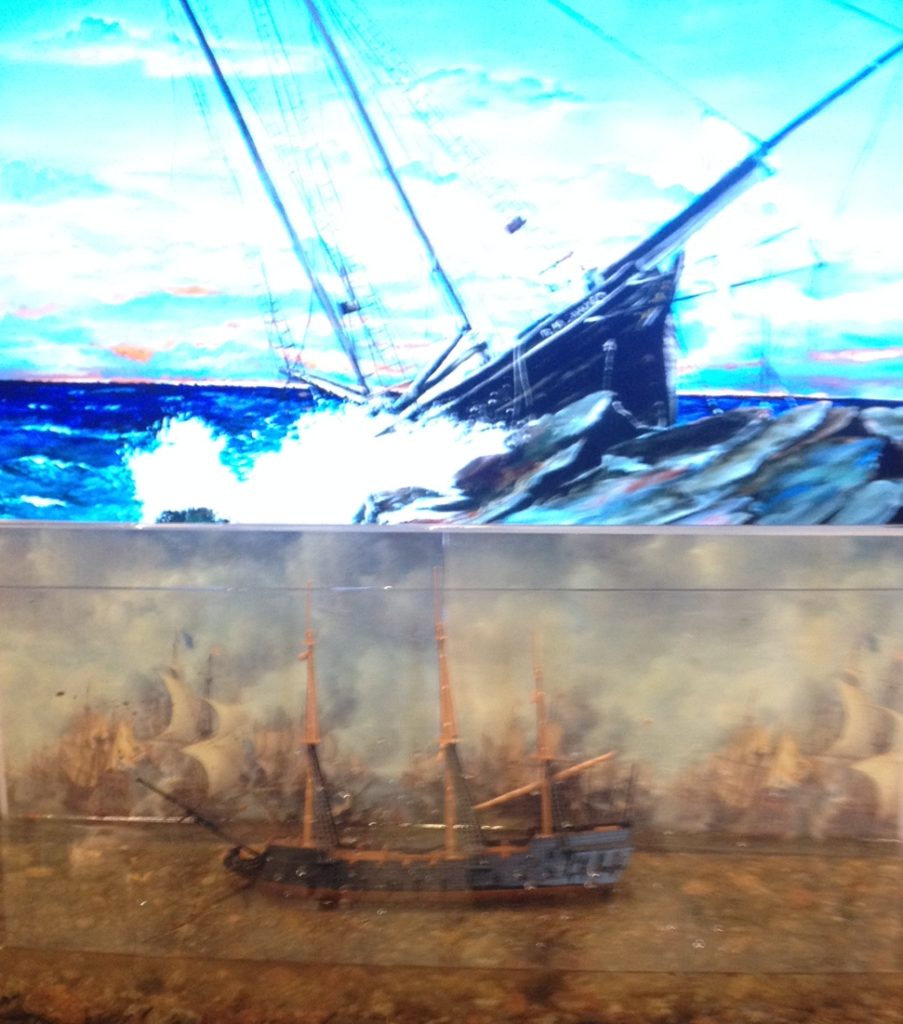 My final project consisted of a dynamic model sailboat, floating in a tank with a aesthetic based on Romantic and Dutch Golden Age Maritime Art.

I have always loved model boats: at home in Maryland, almost every house has one. My house has several; I love looking at them and exploring their intricacies. When presented with the final project in Aesthetics of Design, building a model boat came to mind instantly, but most model boats are static, this project needed to be dynamic. What better way to make a model boat dynamic than by putting it in water and letting it do its thing-float?

This is the general idea, but instead of putting the boat on a stand, I wanted it to sit in water in a tank. I knew this would be challenging, a bit costly, and very time consuming, but I had built models before, so I thought it was possible.

My original plan was to build a model from a high-end kit, using balsa, model glue, canvas, model paint, etc. This method can produce very high-quality models with excellent detail and good accuracy of scale. This model, the “Sharpie Schooner”, is an example of a kit boat, one my dad and I built a few years ago.

I realized, however, that there were several problems with this approach. First of all, almost all models are too large a scale for the fish tank I was using-the mast would stick out way above the top of the tank. Second, these models are rather expensive and VERY time consuming, and time and money are things I do not have much of these days. Lastly, and most importantly, these models rarely float. They are not designed with the intention of ever seeing water, as a result, there are numerous seams under the waterline that unless glued completely would leak and sink the boat. In addition, the deck fittings, sails, and paint are not meant to be exposed to water, and water would most likely damage them. So instead of using a more advanced wooden kit, I opted instead for a simple, plastic set. The set I used has a one-piece hull, so no seams for water to get in, and simple, waterproof construction. It is also small enough to fit in the tank, and within my budgetary restrictions (the set was $25).

picture of boat under construction

I began construction on my boat, and had it finished within my manufacturing timeline’s guidelines-with a week to spare before the expo to allow time to deal with unforeseen setbacks. One such setback was that the boat did not stay upright. I imagine this is a problem with all model sailboats not specifically designed for floating: they are too top heavy, and instantly capsize. On a real sailboat, there is much more weight in the hull than above the deck, but a model sailboat does not share that weight distribution. I tried putting ballast in the hull, but to put enough to keep it from capsizing sunk the boat, so this did not work. I instead tied a piece of clear fishing line around the top of the mast and taped it to either side of the tank, which held the mast upright. It does not look great, but it is hard for the casual eye to notice, and keeps the boat framed in the center of the tank.

With the boat completed, I could shift my focus to the aesthetic. With the boat being modeled after a pirate ship, I decided the best aesthetic would be romantic-style/Dutch golden era-style maritime art. These style were very popular from the late 1500s to the late 1600s and early 1700s to the mid 1800s, respectively; two of the most important contributors were T G Dutton (romantic era) and Cornelis Verbeeck (Dutch golden era). Examples of maritime art, most typically “boat portraits”, can be found in almost every major classical collection or museum. I especially liked the idea of “boat portrait” art, because the model could replace the boat in a painting, while the backdrop could remain. I used a TV with various examples of maritime art for the background, and used Verbeeck’s “An Engagement Between the Spanish and the Dutch” for the middleground (this was attached to the back of the tank). I selected this painting in particular because its color scheme matches closely with the colors and texture of the pebbles on the bottom of the tank, making the middleground seem more seamless and tying the physical model into the painting.

The end result, viewed from the side and above