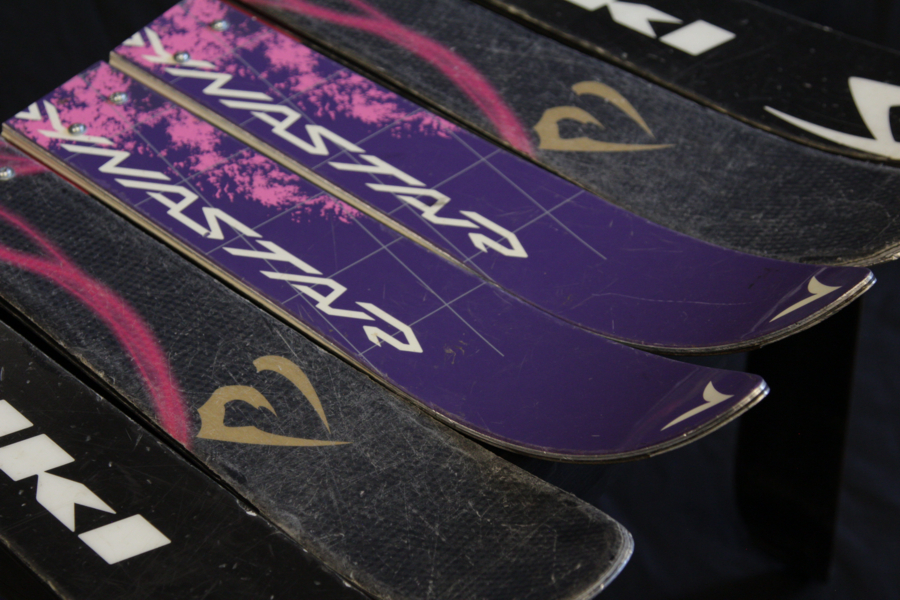 At the start of the semester, this final project was assigned to the Aesthetics of Design class. Students were informed that there would be a very open ended design project due at the end of the semester with only one requirement, it has to be dynamic. Immediately I had the thought of recycling some of the old skis that I have piling up in the garage. Not only will this allow me to lower the cost of building an object, my father and I have been talking about building a chair from all of these skis for some time now, and this was a perfect opportunity to act on some of the ideas we have been speaking about for years. The theorized swinging chair design process started with some sketches. The best of which can be seen below.

After I had decided on a design that I was happy with, I had to make sure that my family was okay with my plan of hanging the chair on the front porch of our mountain home. My mother instantly decided that she wanted the chair to live near the fire pit out back instead, which flipped my design on its back. Back at the drawing board I begun to iterate through different designs and ideas to make by aesthetic chair function dynamically out by the fire pit. I started out thinking I would make a swinging chair, which then shifted to a rocking chair. The prototype for the rocking chair can be seen below.

The rocking was to be accomplished by supporting the chair on a cantilever beam of ski pieces. I knew the strength of the skis would allow for some amount of flex, but would not break under the weight of a human. This design required significant supports to hold the pieces together, so i planned on making the frame from metal bars. Welding a solid frame would allow for a chair that would be able to withstand nearly anything the world could throw at it while it resides in its mountain home.

The metal cost turned out to be a significant amount, and due the the fact that I am a broke college student, it was pushing the limits of my budget. I looked into switching to wood, but that would require a complete redesign on how I was going to support the chair from the ground. I was still excited to build a chair and continued forward with my rocker chair idea, until I began to test and analize other chairs that I encountered on a daily basis. I started to realize that the confort of a chair had much more to do with the contours and bend angles of the object than I had initially thought and in the end, I could not afford to build more than one project iteration. Because of this I went for a project pivot and changed the path of my design. The aesthetic was not to change at all, just the object itself. To avoid any redesign and functionality problems I built something much more simple, a table. This table started out as a whiteboard sketch shown below.

This sketch had slanted legs, which didn’t make it to the final design due to problems with measuring lengths of curved supports. To keep the table nearly level, vertical legs were utilized in the final design. Because skis are inherently not straight, the top of the table is expected to have some gaps in it, but I attempted to minimize this issue with functionality. The two different setup options are displayed below. The more open layout on the left turned out to cover the tabletop much better than the closed pattern on the right, so it was chosen for the final design.

The build process was obviously not as accelerated as I would have liked, but the hours spent working on it were enjoyable. I spent upwards of ten hours assembling and finishing the table, not including dry time for the stain. The top drawer is shown below in mid-assembly phase.

The completed tabletop is shown below before any finishing has been started. The left photo is the table closed, while the right is the tabletop drawer opened by using the hinge at the back end of the table.

Next, the components were disassembled and readied for finishing touches. All wooden parts were sanded smooth to ensure no splintering would occur during use. This was followed by a dark coat of stain to match the colors in the ski pieces.

The final product turned out much better than expected. I am no woodworker, nor am I a craftsman, but I am happy with the results of my handy work this time! The final product is displayed below.