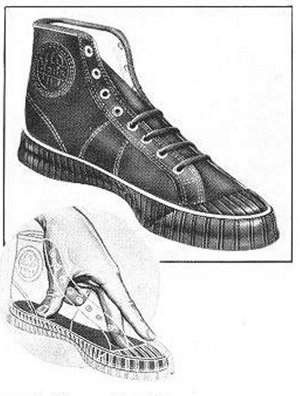 Today, it would be hard to imagine a world where the category of shoes did not include sneakers of any kind. In fact, the most commonly seen type of shoe is sneakers. However, the sneaker was born not too long ago. The first ever sneakers were plimsoll shoes, made in 1930 by a rubber company in Liverpool. They were nicknamed sneakers because of how quite they were, allowing you to sneak up on someone. These were not commercially available, used really only in gyms, and consisted of a very simple design. They had a rubber sole and canvas top. There weren’t even different shoes for the left and right foot! It was not until 1917 that the improved design of plimsoll shoes hit the markets in mass numbers. They were made by a US rubber company in 1892 and coined the name of Keds. These shoes were made with a new process called vulcanization, made by Charles Goodyear, which allowed the rubber to melt onto the cloth.

That same year, Marquis Converse created his first pair of shoes for basketball, shown above. They were not the first converse ever made, but certainly the first successfully selling pair. They blew up in popularity after the all-start player, Chuck Taylor, started to endorse them in 1923. These were the best selling shoes ever made. In fact, 60% of all Americans have owned at least a single pair. The design of sneakers started to head more towards comfort and functionality. One year later, sneakers went international with the creation of the company, Adidas.

Adi Dassler created the company in Germany and began to tailor shoes for all sports. This is now the most popular sneaker company in the world. His iconic shoe included spikes to help grip the ground for sports such as track and soccer. The renowned Jessie Owens wore these shoes in the 1936 Olympics and won four gold medals. Interestingly, Adi’s brother created another shoe company that is fairly popular today called Puma. It is similar to Adidas in that they both create simplistic, sleek shoes for mainly running.

After 1950, sneakers started becoming more of a fashion trend than sports wear. People would buy them not just for working out or playing sports, but for daily use on the streets. Thus, the designs started to become more fashion based, while still keeping in mind comfort and functionality. The competition really began to ramp up in 1984 when Michael Jordan signed with Nike to create the first ever Air Jordans, which any sneaker head will tell you is the most iconic sneaker to hit the market. They had much more complicated designs using vibrant colors and intricate designs.

Since then until the present, sneakers began to come out in all sorts of varieties. They are now made for all sports, including skateboarding and even cross-fit. The designs range from very flashy to minimalistic designs. The biggest players in the game now are Nike, Adidas, and Reebok. Sneakers even began to use high technology designs. Some use air pockets for added cushion and bounce. Others even incorporate springs in the souls. They offer differing styles for different sports, cultures, age groups, sexes, and they even offer special releases for collectors. Sneakers have now become just as much of a fashion statement as a sports shoe. There are even high end brands such as Yeezy’s and Balenciaga, which can sell for thousands of dollars a pair. Truly, sneaker have rose from an unheard of amenity to an almost essential necessity in society.