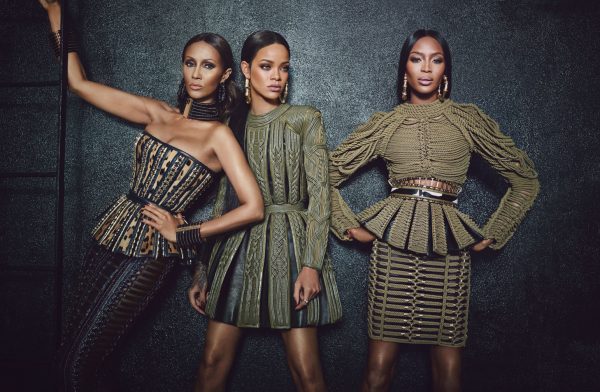 Military inspired fashion explores a certain type of aesthetic that highlights firm structures, hard textures, metallic embellishments and earthy tones. They are directly drawn from classic military uniforms that used to be worn during World War I and II.

The dusty colors that distinguish military clothing from other pieces began in India. The word khaki is a Hindi word for ‘earth’ or ‘dust’. In 1846, Sir Harry Lumsden, had the idea of making his soldiers invisible; he bought white cotton cloth from the bazaar at Lahore and took it to soak in the river. After soaking it in water, he rubbed the cloth in mud and sand to make them match the surroundings. Soon enough, the British army decided to invest in this new camouflage technology that would give them a great advantage during war making the switch from their red uniforms.

Military uniforms are thought to be simply designed. They were made to feel comfortable while at war. They also had double stitching to increase their lifetime and removable buttons to make laundry more practical and efficient.

Now-a-days, fashion designers create military themed clothing. The challenge in designing such pieces comes when trying to add a femme-identity to a simple yet highly tailored garments.

The military aesthetic uses shades of brown, nude, khaki and beige. Black is also a staple color that compliments earthy tones, thus we see it a lot in the runway alongside military pieces. Designers pay attention to little details by using metallic hardware, stitches, and embellishments— either gold for a more sophisticated look or silver for a causal, everyday look. What makes this aesthetic pop out, to me personally, is how designers turned clothes that are normally worn by men during war to a highly structured feminine fashion statement. The sharp silhouettes work perfectly to compliment the female figure by highlighting the waist area using peplum cuts, belts, and high-waisted skirts or bottoms. To wrap the look, these outfits are well paired with black boots-just like in the military-matching khaki heels or sandals with hardware detailing.