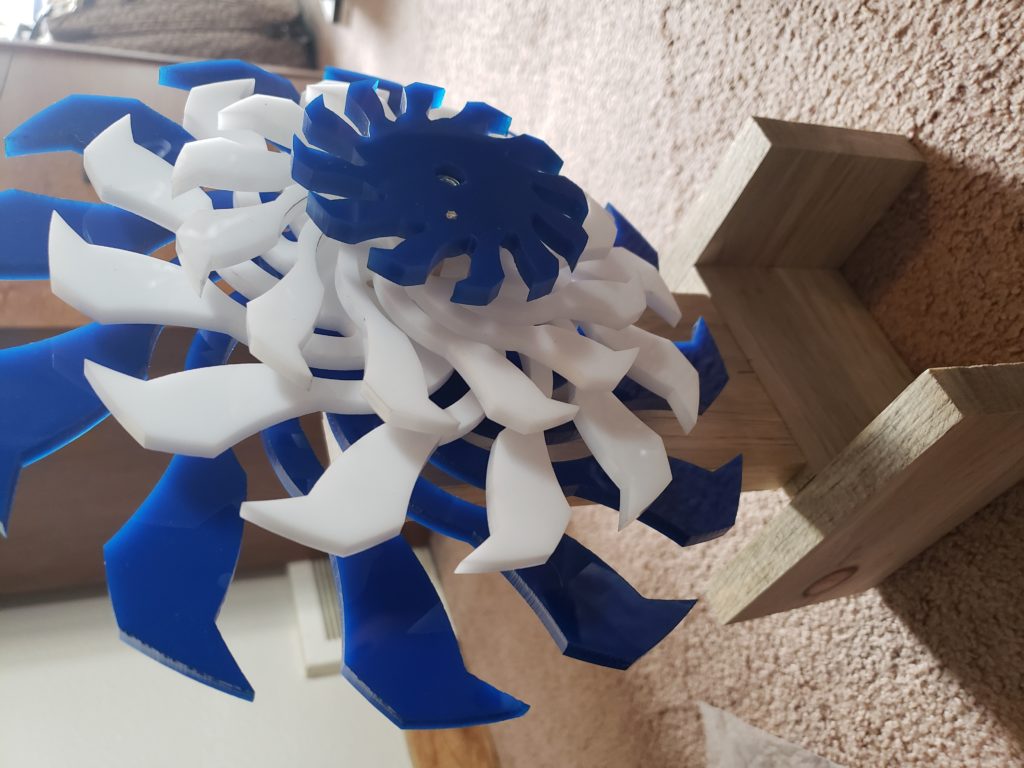 Link to the presentation:

Overall description and photos, then details of what you have made: CAD drawings, fabrication description, costs vs budget, etc.

All photos below were taken by me.

This project started with my inspiration from David C. Roy who creates kinetic sculptures for a living. He sells some of his pieces for around $3k. I liked the idea of something looking so simple, but was ultimately more complex than what people saw. Below is a rough assembly of my prototype. There is only one disk shown, but that was strictly due to resources.

After my original prototype, I decided to build a model in SolidWorks. Below is the model that I created with the 4 disks, 4 spacers, handle, wooden dowels, and wooden base. I built my model to scale in order to create a Bill of Materials and vendors that carried everything for the parts that I would need to make my design.

The first thing I did before I laser cut my disks was added a fillet to the inside of the disks. I found that there was a high stress concentration near the center, and didn’t want to risk the material breaking off. Once I did this, I began laser cutting. Below is a picture of all of my disks before I removed the protective coating.

Next, I ordered a 6061 aluminum shaft off McMaster and threaded both ends. One end was for the hex head cap screw that was inserted into the front end in order to drive the smallest disk. The other was for the handle that I screwed into the back. Next thing I did was think about my frame. I had a couple iterations and created both to try them out.

The first iteration was a steel base. This base required a forge, power hammer, anvil, oxy acetylene torch, bending fork, and a drill press.

The final steel base is shown below. Overall, the steel base cost me $0 but took around 3 hours.

After making this base, I moved on to a wood base since my CAD model/ initial idea was a wooden base. I used a biscuit jointer, chop saw, planar, and wood glue. This design wa also $0 and took me 1 hour instead of the 3 that the blacksmithing took.

The final design is shown below. In the picture, the dowel pins are slightly visible. The purpose of these dowels is to drive the disks 90 deg from the next disk. The driven disk is the small one in the front that is attached to the shaft with the hex screw. Once the first disk starts to spin, the dowel that is press fit into it, slides along a groove in the second disk until it hits 90 degrees. Once it hits 90 degrees, it catches and spins the second one. This process continues until all the disks are spinning 90 degrees from the one in front.

My budget was roughly $50, so this stayed well below my limit.