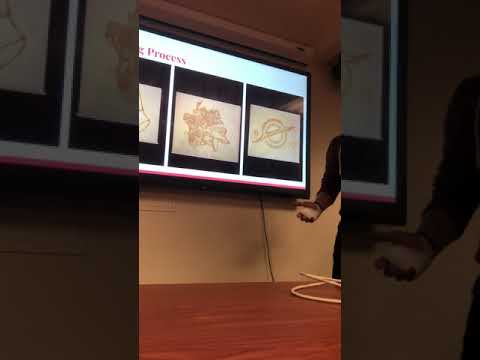 For my project I built a food dehydrator. The aesthetic I planned to use was art nouveau which is an art form inspired by natural structures and forms, but in the end decided to add a personal touch to the device. I first planned to use sheet aluminum as the material, but after some research realized the cost was over what I had planned for this project. I instead opted to use wood and began working. I bought MFD wood from home depot and measured out all the lengths I needed and cut everything on the table saw in the ITLL machine shop. Next, I took the panels to the laser cutter and began etching the images I saw fitting for my aesthetic. As I mentioned, I first planned to use art nouveau, but as I was making the dehydrator I began thinking of what an aesthetic meant. After some thought I realized that an aesthetic is something which should serve the purpose of either being pleasing to the eye or as a deterrent of some sorts. In my case, I wanted the dehydrator to be pleasing to my eyes, so I also etched an image of a chef’s hat as well as an image of a black-hole. I added the chef’s hat because this is a food dehydrator and it just seemed like a specialised device that only a few people would use, and the blackhole image is a tribute to the recent image taken of the M87 blackhole.

After getting done with all the etching I began putting the body of the dehydrator together using Titebond II. I wanted to use nails in the beginning to put together the dehydrator, but the MFD doesn’t seem to be made for nails as it is made of layers, so as I was putting in the first nail I lost a few layers from one of my panels. After the glue set I installed hinges on the inside of dehydrator and installed a door. My next hurdle now is to complete the circuitry needed to have a heat source inside the dehydrator. I will be getting help from my brother to wire up everything for this. I decided to work on this with my brother as it is my final semester here at CU and I saw it as a last opportunity for him and I to work on something together as we’ve talked about doing a project together for some time.

Yousef Alqattan
Next Post
Final Report Part 1 – What and How