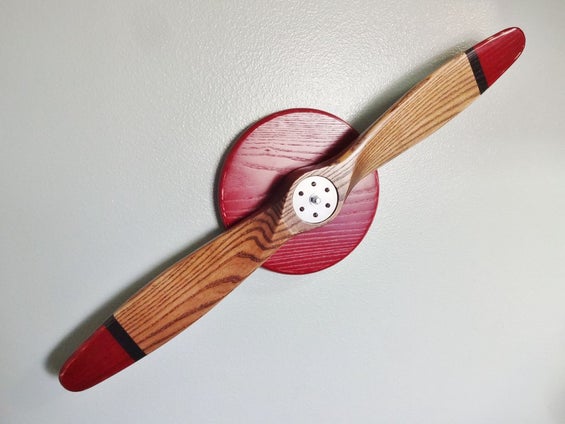 For my final project I am planning on making a propeller out of wood. I would like to make a propeller for my final project because I love all things aviation. Ever since I was young I have been fastened by flight. Some of my earliest memories are of planes; a majority of my toys growing up were even aircraft. I would fly them around all day and pretend it was me “behind the stick”. This lead me to want to become a pilot. I even had the opportunity to get behind the controls of a real airplane in 5th grade! To commemorate my love for aviation I want to make an art piece to hang in my office.

I plan to make the propeller out of wood. From my preliminary research I have found that there are several ways to go about making the propeller blades. One method that I have seen is to use a band-saw to cut out the general shape and to make rough cuts, then use a belt sander to further refine the curves on the blades. This method is what the creator of the propeller seen above used. Another method that I have seen is to layer sections of different shape to form the general curvature of the blade, then sand the layers to form one continuous form. I have not decided on which method I am going to use.

I also have not decided on the type of propeller I want to create. I like the aesthetic of simple blades, but I also have thought about creating a replica of WWII fighter aircraft propellers as well. The simple propeller is aesthetically pleasing because of it’s simplicity. These propellers are more common in general aviation and were also used in early WWI fighters. The nostalgia of this design is what attracts me to it most. On the other hand I also am considering making a replica of a WWII fighter propeller. I would want to do this because WWII aircraft are some of my favorite planes.  Their powerful stature and sleek lines are also aesthetically appealing to me. The main drawback against the latter option is that it would require a far more complex design and at least double the manufacturing time.