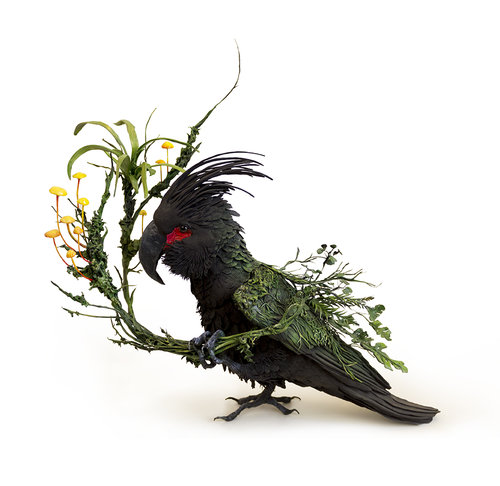 The primary aesthetic I want to shoot for with this project is something that is generally contemporary as well as surreal – the sculpture made out of chicken wire fence is meant to both model something realistic, but also be constructed in a way that the form is ‘otherworldly’. Moreover, I want the piece to construe a meaning or inherently represent something beyond the form and structure.

Generally, the contemporary aesthetic incorporates a more modern complex message into the ‘meaning’ of any given piece. Generally, something with a contemporary aesthetic is making some semblance of social commentary or is meant to intrigue or lead the viewer into further interpretation. On the other hand, a surreal aesthetic generally rejects a more rational interpretation and to remove itself from the conventional. Surrealism is an aesthetic that tries to move beyond the general perception of ‘reality’ and instead uses the uncanny to construct meaning.

Below are some examples of both contemporary and surreal sculptures:

I’ve had a few more ideas conceptually since the last post regarding the initial inspirations; To incorporate the dynamic component of the project, I think I will end up using a servo or motor to represent simple motion over time somewhere on the sculpture. Vaguely, I was thinking either a moving body part (via simple lateral or rotational movement) or something more complex like shifting or morphing of the frame itself. The surreal aesthetic will be conveyed through the form, while the materials will help lend itself to the contemporary aesthetic. More specifically, I think that using motion (and the parts to achieve such motion) help to convey meaning within the sculpture. Specifically, the idea moving forward so far is an owl sculpture which moves its head to follow things moving past. Here’s a rudimentary sketch of that idea:

In terms of other aesthetics, there are a few that I could definitely lean into more that aren’t too much of a departure from the original concept. For instance, using a greater surreal aesthetic and move away from the contemporary aesthetic, like artist Jewett from above. For instance, the sculpture form could end up moving away from the use of chicken wire and instead be a more realistic material while departing entirely from the general form of an owl, and instead be more extravagant or mix the structure with that of differing animals. An example of this would be a sculpture like:

Alternatively, I could go more along the lines of my Upcycle project, and use a more Kitsch aesthetic, I could even incorporate fast food wrappers into the sculpture instead, and transform the piece from something surreal into something more contemporary as well as kitsch, leaning on the garishness and ‘ugliness’ of the fast food wrappers, similar to my upcycling sculpture. Fundamentally, this would still be contemporary since it is essentially asking the reviewer to construct meaning, but it would also definitely be different from the current ‘mood’ I would be trying to achieve. For an example, look back to my upcycle post.