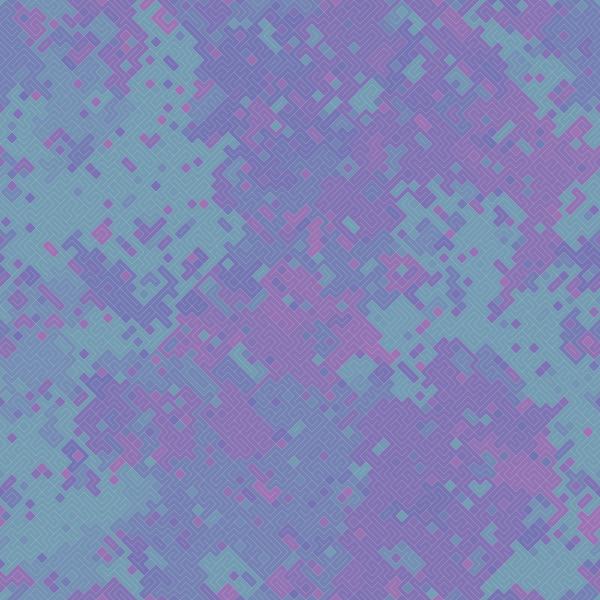 My project which I’m nicknaming “Tiled Zones” draws from a lot of my earlier influences in coding and generative art. In our first blog post: Aesthetic Exploration, I chose Algorithmic as my topic because I had had so much time to tinker around with it. Coding itself is hardly glamorous and in my opinion differs greatly from the artistic process seen in other mediums, but the output of the rules that you write is undeniably unique. The ability to make something that looks so complicated from a few simple rules is one of the reasons I got into this field in the first place. To be explicit, what I’m calling an “Algorithmic” or Generative aesthetic means that a work is defined by a set of rules which can often be repeated to different results. The first exercise in this class where we drew circles inside of circles is algorithmic because from a simple set of instructions.

Another key aesthetic pulled into my project is that of mazes. While usually less fun to solve, mazes can be beautiful in their own right. They typically mix the order of some defined shape with the disorder of haphazard passages and openings. Random generation adds some new things to this aesthetic that are only visible when zoomed out. There might be a bias towards horizontal passages, or maybe longer winding ones. These behaviors can almost seem like optical illusions when viewed from a distance. One of my favorite sites is Jamis Buck’s blog on the topic, there he has an interactive list of many different algorithms that you can see working in real time (http://weblog.jamisbuck.org/2011/2/7/maze-generation-algorithm-recap).

The base idea for this project was to use the easiest maze algorithm possible:

draw a grid of diagonal lines of equal size, roughly half facing 45 degrees left and half 45 degrees right so that each line can touch the tip of the one above it.

If you do this you then have a pseudo maze with many different isolated zones. The most obvious zones are the 2×2 squares that are generated, but other can span hundreds of cells. When colored in, they look like this:

I really liked how this turned out. The larger zones almost look like continents on a map, where smaller zones give a more fragmented look. When I run this process over an over again I see underwater shelves, clouds, maps. However I need a dynamic aspect to this project

Therefore what will happen if I flip one of the lines? Now I’ve either connected independent zones, or split one into two. What should that look like? Will conflicting zones merge, or should they “Fight it out”. Will newly made zone take on their own color? I’m still tinkering with these ideas and by next week should have an answer.