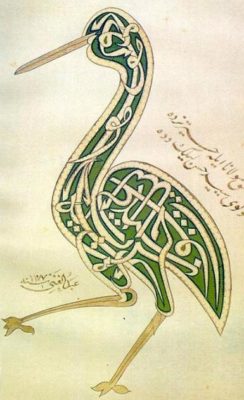 When it comes to aesthetics roots, my roots go back towards the middle east. The aesthetic in the middle east basically falls under the Islamic aesthetic which is mostly inspired by religion, language, and culture. It can be seen in many different forms such as paintings, sculptors, poetry (I think it counts), building decorations, …etc. The Islamic aesthetic can be seem in some more often in some form than another, and some of these common forms are mosaic, puzzling language masterpiece, and intricate simple patterns.

Mosaic aesthetic can be seen in many different places in the middle east. You can find it on exterior walls, swimming pools, and sidewalks.

In the middle east, people take a lot of pride in the Arabic language and use it to create impressive poetry and impressive, and sometimes puzzling, language masterpiece. The image shown above is an example of an art in the shape of an animal with Arabic letters in it. I’m pretty confident it says something meaningful but I cannot be sure myself as I cannot read it.

The above image shows a simple example of a very popular type of art found in the middle east. It is basically several patterned shapes combined to form a beautiful image. You can see this type of aesthetic in many mosques, building, sidewalks, traditional clothing, blankets, and many more.