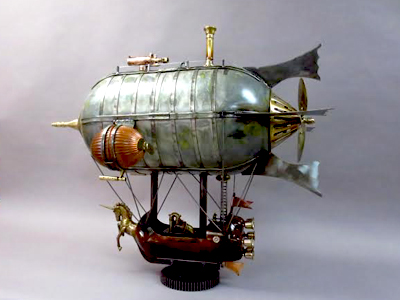 The Aesthetic that I have chosen to explore is Steampunk. The idea of Steampunk is similar to cyberpunk and the goal is to show modern technology in the form of 19th century industrial machinery and exposed gears. Steampunk was first used in the 1980’s and the term  was first coined by K. W. Jeter when trying to describe his works of writing. Following the coining of the term, Steampunk became more popular in books and movies such as the “The Difference Engine”, by William Gibson and Bruce Sterling. This book was written in the 1990’s and brought popularity to the genre in writing.

The Difference Engine, by Rez Studio [1]

A movie that helped to popularize the idea of Steampunk was Journey to the Center of the Earth. The submarine used in the movie was based on a Steampunk Aesthetic, as was much of the older technology seen in the movie.

Steampunk has now become more popular in both fashion and cosplay. The fashion is based off of 1850’s Victorian England with modern technology such as cell phones and guns. The modern technology is then changed to give the appearance of objects from that time.

As Steampunk has gained popularity it has become more common to see in themes and designs.