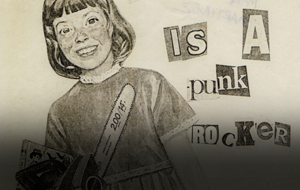 Punk as an Aesthetic

Punk is a aesthetic that is centered around the punk rock movement.  This movement started around the 1970’s and has influenced clothing, music, dance and even politics.  At its creation in the UK, punk was seen as the lifestyle of a rebel.  Those that didn’t fit in with the rest of the community and wanted to be set apart.  These people were loud, offensive, and destructive.

With punk music being made up of yelling and overwhelming drums, it is no surprise that the primary dance style associated is moshing.  Moshing consists of large ‘pits’ of people running around aimlessly crashing into each other and inevitably causing harm.  The mosh dance style was adopted by the fusion metal movement out of the USA and quickly took off with many other aggressive genres including punk.

When you think about the British Invasion on music, most people think about the Beatles or Yard birds, not rowdy punk bands..  The The first major punk band to hit the main stream in the United States was the Sex Pistols.  These four men would go on to set major fashion and music trends amongst the punk rock community.  Their iconic dress style of leather jackets with safety pins in them, and the tall spikey hair remains to this day instantly recognizable as punk.  The Sex Pistols influenced many other American artists including Boulder’s own The Dead Kennedys.  From there, the genre of punk took off and fans sporting all black, dyed mohawks, and studded boots could be seen nation wide angering the older generations for years to come.

After punk rock took off in the United States, it wasn’t long before we started to see the influence of the rebellious spirits in every day politics.  At the very core of punk was an idea of anti-capitalism.  The front man of the before mentioned Dead Kennedys, Jello Biafra, is possibly one of the most famous anti-governments punk rockers of all time.  In fact he still participates in political discussion and has even received the attention of former President Donald Trump during his 4 years in office.  An example of some of Jello’s songs include: Holiday in Cambodia, which reacts to the devastation caused by former dictator Pol Pot and the song: Kill the poor, which exclaims that the US government is doing everything to keep the rich richer and to hurt the less fortunate populations.  Many themes similar to these can be seen in modern punk and the most extreme punk rockers will say that if the song doesn’t posses themes of anti-government then it doesn’t count as real punk.

As punk has evolved from a music style to a lifestyle, several themes have prevailed to define it.  Weather it be the black clothes, spiked hair, loud music, or political views, punk as an aesthetic is easily recognizable and hard to ignore.