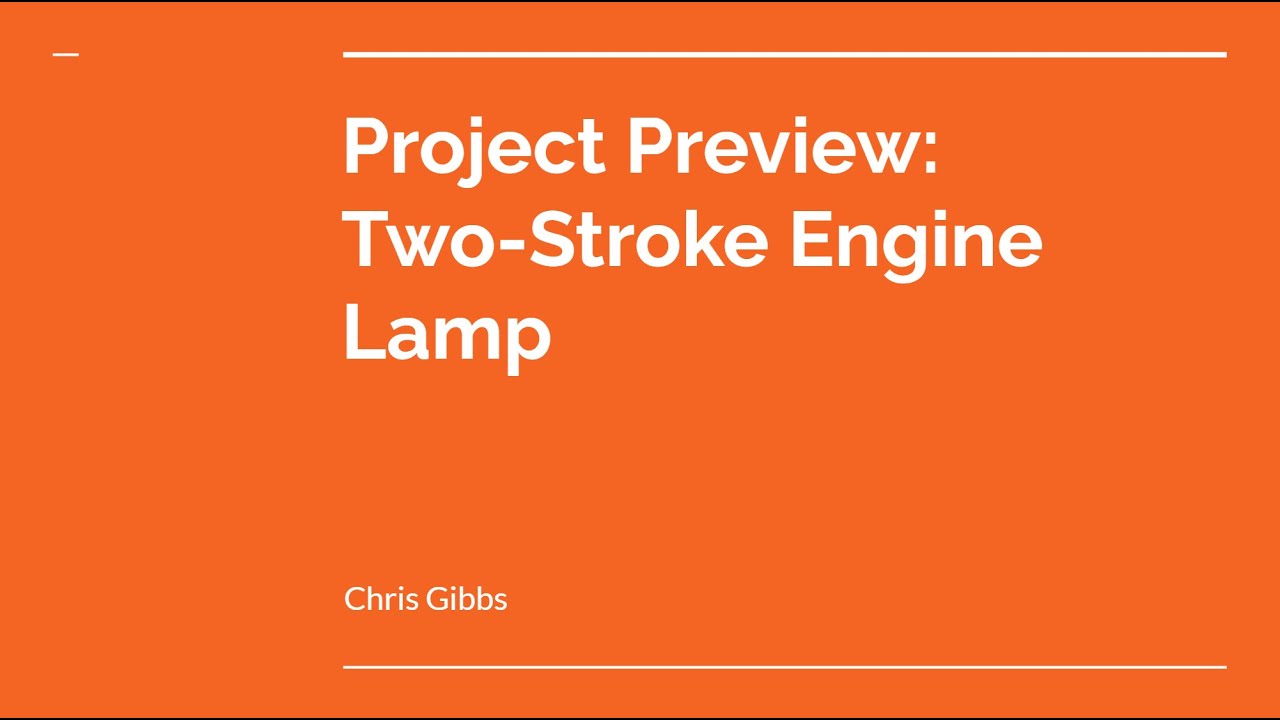 As discussed previously in my blog posts, I’ll be making a two-stroke engine lamp for my final project. Previously, I had talked about how I was inspired by my own dirtbike and the simplicity of a two-stroke motor. I also have wanted a desk lamp for some time, so I wanted to challenge myself to merge the two ideas. I came up with the idea while looking at an image of my dirtbike and thinking about how cool it would be to have a lamp with a moving piston.

I have decided to go with a minimalist aesthetic as my vision for this project since it goes against the image above, which is filled with so much detail and complexity. You can barely see the engine casing in the picture, but what drives the bike is hidden deep within the plastic and metal parts surrounding it. Two-stroke engines are known for their simplicity, so I felt that a minimalist aesthetic matched what I wanted to achieve with this project. The other elements of my vision for this project include the following:

With these ideas in mind, I began sketching. Below is an image of the front view of the lamp, along with annotations calling out parts/features, which are found below the image.

Figure 2: Front View of the Lamp.

The parts/features seen above are described below:

Since this piston isn’t in a cylinder, there’s no need for it to be cylindrical, however, it does need something to hold it from falling over horizontally. Hence, I added feature #8 to only allow vertical motion of the piston. I then designed a quick sketch of the inside of the lamp, which will also explain how everything works.

Figure 3: Inside View of the Lamp.

Below is a description of each part/feature callout.

I came up with the idea of using a fan motor at the expense of sacrificing a fan in my room. I took the lamp apart and was easily able to extract the motor, as shown below.

Figure 4: Partially disassembled (and dusty) fan used to get the motor.

Figure 5: Circuitry, power supply, and motor that will be used to move the piston.

Figure 6: The extension cord that will be used to power the light bulb and motor.

With the sketches from Figure 3 and 4, I formed the following bill of materials for this project.

Since I already owned 3D printer filaments and the small fan, which I used to source a motor, my costs for this project are extremely low. Additionally, the Amazon purchases were covered by a gift card, but even if I didn’t have that, it would have only added about an additional $15. I was also able to already purchase all of these parts, knowing that this is the route I want to go down. Using the shipping dates and my knowledge of how long it takes to design and 3D print small objects, I formed the following timeline for my project.

Figure 8: A brief timeline of the project.

Knowing that the lamp base itself will be quite large, I decided to first design and print iterations of the piston assembly this upcoming weekend. The lamp base will likely be printed sometime between April 6th and April 18th. It may take multiple attempts, hence the large window for printing. I also added a large amount of time for final assembly or slack time toward the end in case things break or if a redesign is needed. The project will conclude on April 29th.