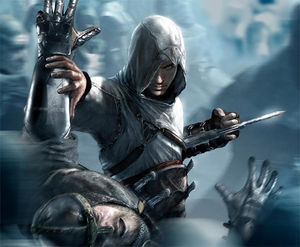 For my final project, I created a hidden blade like the ones featured in the videogame Assassin’s Creed. In this report, I will describe the design selection process, the planned manufacturing steps, and the testing protocols.

The aesthetic of the hidden blade has varied in each Assassin’s Creed game, featuring the common styles of the era the game is based in. Some of the ornamentation consists of the hidden blade cover and the majority is shown in the bracers that hold the blade cover to the user’s arm. The more modern hidden blades shown in the games are compact and not always feature bracers (since we no longer fight battles with swords and don’t need to protect our arms and wrists from getting cut). However, the design variations of fan-made hidden blades, especially in the DIY environment, feature either nice-looking modern styles or the evidence that the parts were made from readily available components such as cabinet roller slides. I was initially thinking about doing a futuristic shape with metallic color. However, after learning about the effects of certain aesthetics in class, I realized I could implement some of these concepts into my design. My goal was to design a modern-looking hidden blade that is easily concealable and is safe to be used as cosplay and not as a real weapon. In conclusion, I adopted a less aggressive aesthetic in my project and designed the mechanism encasing with a shape that does not trigger an alert response in people.

I also wanted to create a more innovative mechanism to activate the blade. Most blades in the market are either spring-loaded and activated with a button or have a string and ring to pull the blade. My innovative mechanism features a motor attached to a rack and pinion. The electrical system is activated by flexing the hand up and which would bend a flex sensor attached to the top of the wrist. This sensor sends a signal to an Arduino and then this activates the motor.

This design is simple since it features a rectangular box container that holds the blade mechanism. It would feature two slots on each side to insert elastic bands to retain the hidden blade to the user’s arm. The mechanism would also be designed as simple as possible, and the Assassin’s crest would be engraved onto the surface. The large crest can capture people’s eyes and bring unwanted attention and reduce stealth in what is supposed to be a hidden weapon. The black color has the possibility of remaining undetected and can serve for increased stealth. However, the color black can trigger an alert response in people who see the hidden blade. The mechanism shown is a simple tension spring with a thumbscrew that the user can pull back and push into a retaining pocket. When the user wants to engage the blade, he simply needs to push the thumbscrew to the side and the spring will pull the blade all the way out. This design is a little dangerous since it can be accidentally triggering, so a locking mechanism would be necessary.

This design gets rid of sharp edges and substitutes them for curves. The entire box is made of basically three semi-overlapping circles. The idea of having a curvy profile is that it has a lower chance of triggering an alert response in people who see the device on the user’s arm. Given today’s technology and many wearable electronic products, people will lean to think its some sort of Fitbit or a similar product. With this design, the user can feed three elastic bands through the slots on the edges of each circle to attach onto their arms. The Assassin’s Crest is still featured but it will be smaller and located in between where the elastic bands cover the device. For this model, I was thinking of using a moss shade of green. I believe this color poses little threat compared to the intimidating black and it is still dark enough to remain stealthy. The mechanism of this device would be a small DC motor attached to an internal battery which is activated to turn a pinion on a rack. This would create a transfer of energy between the rotational motion of the motor and the linear displacement of the rack. By attaching the rack to the blade, the user can extend and retract the blade at the push of a button.

After receiving feedback from my peers in the Design Preview presentation, I implemented some changes to the Less Aggressive Design. I changed the color from green to blue. Even though green is hard to notice, it could remind people of military related equipment. Blue is peaceful and is still hard to notice or that could potentially trigger an alert response. I continued by removing any straight edges, even in the vertical faces of the container’s outer surface. I included the edges and slots for the elastic bands to be attached. I also moved the blade exit port away from the middle of the container. This gave me more room to insert the electronics without expanding the container’s width as much as I had initially planned. I also changed the servo motor from a HITEC HS645MG to a HITEC HS85MG to reduce the amount of space required. This change involved reducing the torque on the blade, given that the purpose is for cosplay and is not required to withstand a large load, the new amount of torque will be enough to move the blade without posing a threat from being used as a weapon. I added an outwards draft as suggested by my peers, this would allow for the bottom surface to be flusher against the user’s harm. I also cut the bottom surface with enough of a curvature to sit flush against the user’s arm, mimicking the shape of a human forearm from below the elbow to the wrist. Similarly, I designed the flex sensor housing to have a similar shape but fitting on the top side of the forearm. I included two V-shaped rollers to keep the blade’s rack aligned with the pinion. Additionally, two pins, one on the blade and one on the container lid guide the blade by fitting onto a linear well on the opposite side. Finally, I added the Assassin’s Creed logo as an engraving, this will make draw less attention to the device.

The container, lid, and flex sensor housing are all manufactured using HP Multi Jet Fusion additive manufacturing (a type of 3-D printing). This allows the components to have complex shapes while reducing their cost. However, the material will be limited to plastic for this manufacturing style. These components could be made from metal but they would cost over $3,000 a piece instead of the inexpensive price of 3-D printing. These components can be spray painted with their respective colors after manufacturing. For manufacturability purposes, the inner ribs must be printed separately and then screwed into the container, since the side holes on the columns (where the servo attaches) cannot be tapped if they are inside of the container.

Since this device is meant to be used for cosplay and not as a real weapon, there is no need for the blade to be made from metal. The blade will also be made with the HP Multi Jet Fusion and is to be colored with a metallic coating to give the appearance of metal.

All other components are off-the-shelf and do not require manufacturing.

The device will require calibration, a certain number of motor rotations will result in the maximum allowed displacement. To calibrate, rotate the motor until the blade extrudes 3 to 4 inches from the tip of the container. Test the alignment of the blade at its extruded position my grabbing it and moving it with your hand. If it feels loose, then the blade cannot extend that far, and the motor must be calibrated to have a shorter maximum extrusion.

Test the rigidity of the blade by softly bending it. The blade itself should be able to withstand a large load but no more than 10 lbs of force should be necessary for testing, given that it’s meant for cosplay. Apply a point load of 10 lbs at the tip of the blade (as if trying to forcefully retract it), the blade and servo should withstand this amount of force and the blade should not retract.

This project began as a way to compete against the current hidden blade designs both in the market and the ones created by DIY projects. I wanted to create an innovative activation mechanism that has not yet been used in any of the other designs. I was able to achieve both of these goals but was not able to manufacture the device due to the high cost of components and long lead times for manufacturing.

The design features a non-aggressive style with curved edges, many circular features, and light colors. This prevents the product from triggering an alert response in people who see it and adds to the stealth of what is meant to be a hidden weapon. This product is meant for cosplay but could also be made with metal components and be used as a real hidden blade weapon. However, the cost would be above $5,000 and the servo motor will likely fail if the blade was used to stab something.

The blade protrudes 3 to 4 inches from the tip of the container, even though the blade is 7 inches long. The geometry of the container could be slightly changed to allow the blade to protrude more but at its current length, it allows for a variety of servos to be installed into the device.

CAD used from the Web:

Assassins Creed Logo used for base to engraving: https://www.cleanpng.com/free/assassins-creed.html

Gary Marshall
I am originally from Venezuela and moved to the US when I was 17. I graduated from CU in 2019 from Mechanical Engineering with minors in Physics and Engineering Management. I then decided to pursue masters in Mechanical Engineering and Engineering Management. I am working as a Systems Engineering Intern at Syncroness and hope to continue there full-time if offered a position. I enjoy hunting, fishing, camping, hiking, skiing, playing guitar, playing video-games, and playing with my dogs. Let me know if you like one of these too or want to know more about me!
Previous Post
Final Project: Plant Wheel
Next Post
Final Report – Swivel Bar Stool