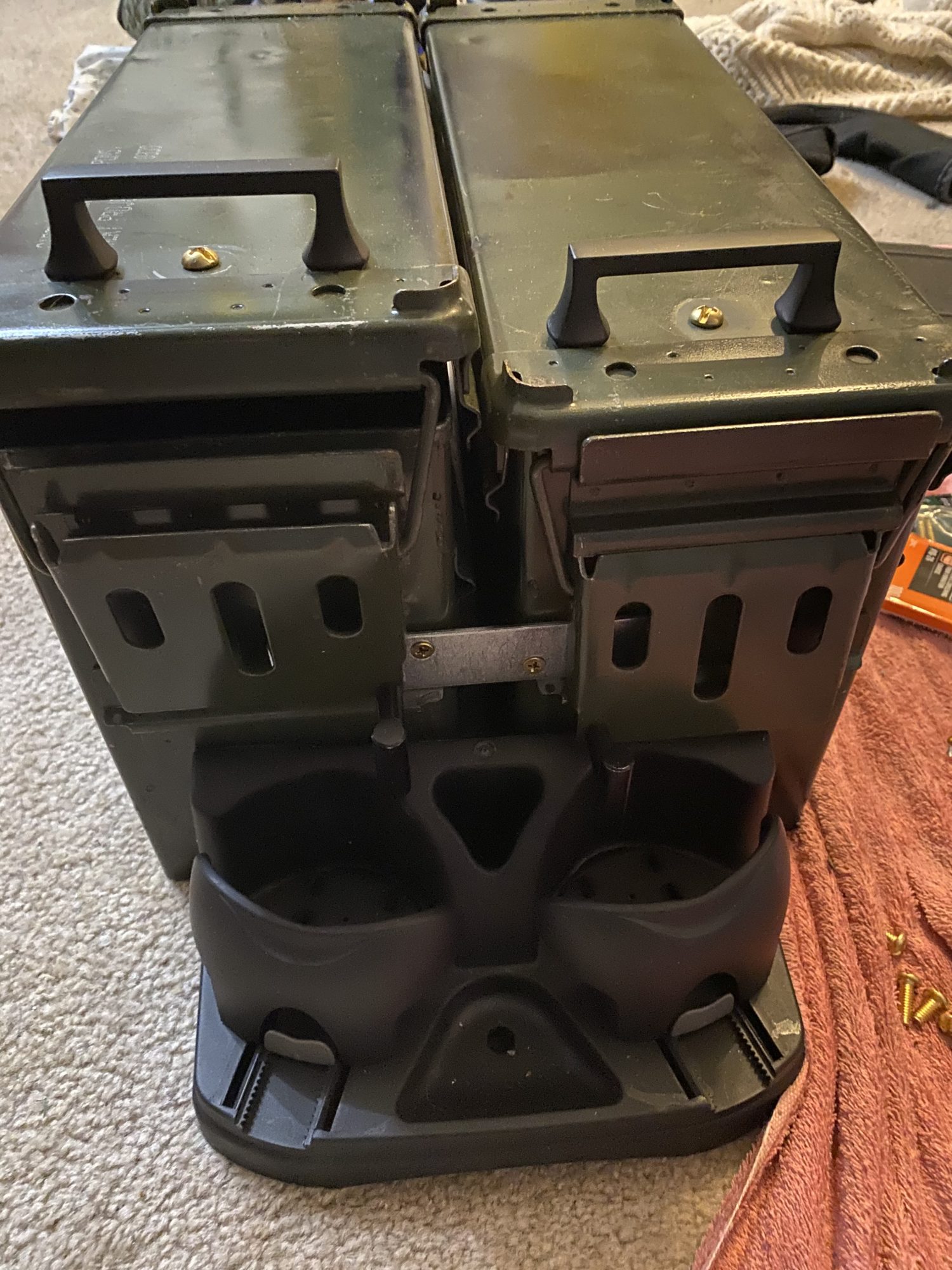 The inspirations for this project was two fold: the center console in my current car was butts, and my dad has already made new center consoles for the old Jeeps that he has made, plus I saw ammo crates in a store one time and they were pretty neat so I had to cop. I don’t know if I stole or adapted any designs seeing as how a center console is just a box inside a car, but I guess I can credit the inventor of boxes, so thanks Robert Gair in the 1870s.

As far as envisioning a a finalized product goes, the below image was the rough Idea that I worked towards. Crates being green and their lids blue, the red is a cupholder portion and yellow and orange are hinges and handle respectively.

So, roughly it turned out the same but there were some ideas in this prototype that were just dumb, like looking back on my past self I am just disappointed.

The specifications that I had were pretty simple, it had to fit in my car, had to have an army aesthetic and had to have cupholders and act better than my current center console.

I wont spoil anything, but it fits, it kept the aesthetic, and it has cupholders so I think I met my specifications.

• Add a detailed description of your fabrication process, planned or actual. How did you make
your artifact, or how would you if not for the pandemic? What are the steps? Describe the
steps shown in your timeline graphic. Document with lots of additional sketches, flowcharts,
photos and/or video.

So, if you find yourself wanting to make one of these, first I would advise you to look into alternatives because this was kind of not the most fun thing to do.  Anyway, here are the steps that I took:

(1)Purchase the things you think you will need from amazon, ie ammo cans, two different cupholders

(2)Get given an old drill from you dad and order new batteries for it, and forget about the project for a week

(3)Go to homedepot to get inspiration and purchase an assortment of handles, and bolts and things and some black spray paint and clear coat

(5) Take the thing inside after the paint has dried and use your new old drill to attach the black cupholders and mock up the front one after you separate it using a pocket knife.

(6) Go, wow that’s not gonna work because the handle things are in the way, lightly swear to yourself and realize you will need an angle grinder. Go get said angle grinder.

(7) Cut off the handle things, and do this after putting on the cupholder thingy because that was a good idea (sarcasm).

(8) Continue to play with it and realize that opening this thing requires you to be an actual body builder, so add some grippy bits to help with latching and unlatching. Those little black guys actually help a lot.

(9) Realize that the latch on top is stupid and causes extra friction between the lids making it still impossible to open, get rid of the top latch and replace with two little handles.

(10) place a “mending plate” (according to Homedepot) in the middle of both of them to constrain their motion so that it doesnt rub and actually opens.

(11) Place into the car, realize the massive oversight.

(Well I have just tried to upload the same image now 12 times here and its just not going in, I just want you as the reader to know that I tried and I am not trying to gyp you from your reading and viewing experience, but I didn’t choose to use this website. Anyway use your imagination to look from the open driver door of an 89 ford bronco with gray carpet and this center console just peaking out over the drivers chair. Then imagine it looks really really good, and then lower your expectations, that’s this image.)

(12) Allow the massive oversight to stop the project here.

Can you see what that oversight is? Well, the holes where the previous console lived are recessed and also not on the same level, this in case you were wondering, is bad for flat bottomed ammo crate center consoles. Did I fix this problem? Nope. Do I plan to, yeah probably because I need a center console in my car.

This is kind of meta.

I started with a working center console with really small cupholders, and I have now ended with metal shavings in my carpet, two ammocrates screwed together and no ammo crate in my car. All things considered I would call this a success.  If I had done this differently I think I would have just purchased the front cupholders and put it onto my existing center console and called it a day. One way or another this thing is going in my car, even if I have to weld it directly to it so that’s the future for this guy, I may also add a cigarette lighter outlet on the back for when you got the crew in the back. I may add two little white stars to the covers of the rear cupholders too with spray paint.

Everything I said above but in video form, and depending on your reading level, faster.