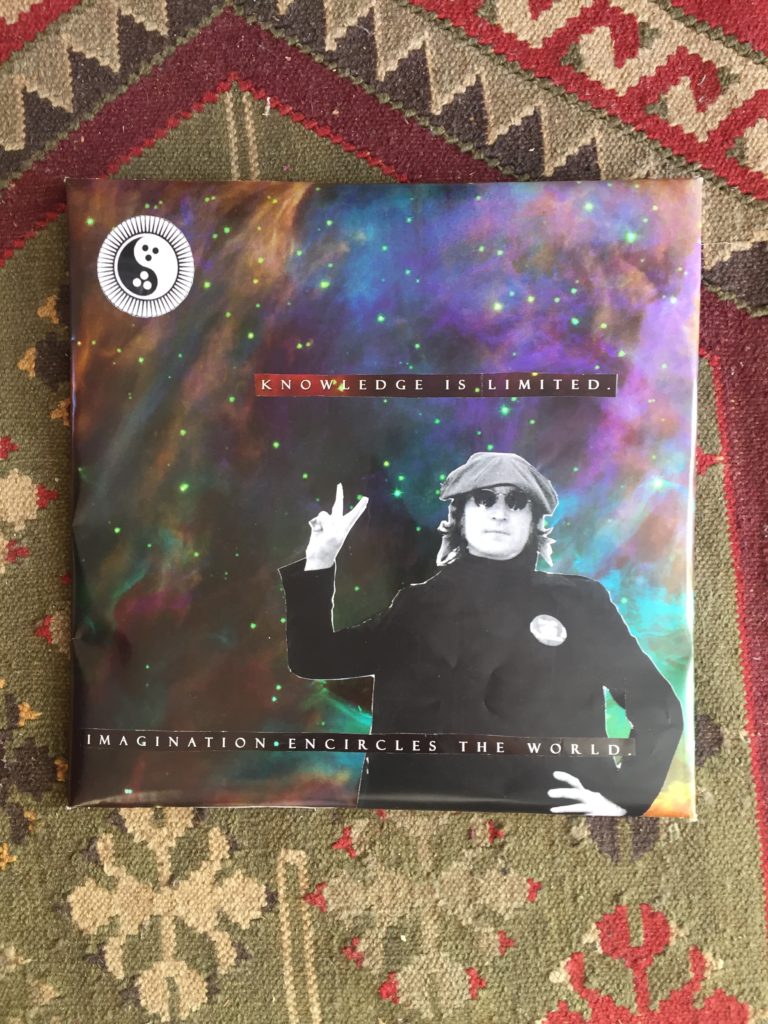 My project was originally going to be a bench made up of old skis and snowboards and some wood. However, after realizing I was not going to be able to obtain the necessary materials necessary for the ski bench, I had to quickly come up with another idea. This delay gave me less time to design my second project, yet I am still pleased with the outcome of John Lennon in Space.

My project was inspired by old posters I had lying around my room. An old poster of space with an Albert Einstein quote on it that read, “Imagination is more important than knowledge. Knowledge is limited. Imagination encircles the world” has interesting resemblance to both the yin and yang sign and John Lennon holding up the peace sign. I liked the feeling of peace the art put off and John Lennon’s song “Imagine” came to my mind when I thought of putting him on the poster. Not only does the song “Imagine” go along with Albert Einstein’s quote for obvious reasons, but it also talks of world peace achieved through everyone becoming “dreamers”. I felt as though the yin and yang symbol had great relevance to this concept of “dreamers” vs “realists,” because the yin and yang symbolizes two forces coming together.

Although my vision for the project was somewhat unclear at the beginning of the project, I quickly came to a conclusion on what I wanted to do with it. I really liked the sense of peace the artwork represents and I thought it would be perfect for my apartment. I wanted to hang the piece from the ceiling but did not keep in mind that may cause the artwork to rotate, reviling its backside. While making the piece I did not keep this in mind, and as a result I did not make the backside of the piece aesthetically pleasing. Having a better design plan before working on the piece would have helped prevent this from happening.

My functional goals were a little thrown off after realizing hanging the piece would not be ideal, however, my goal of hanging the piece is my apartment is not lost. I figured if I were to tie two pieces of string to the piece it would prevent it from rotating while allowing it hang at the same time. As for the artistic goals, I am very pleased with how the art came out. I thought it looked good and showed little sign that it was one piece of art that came from many different posters.