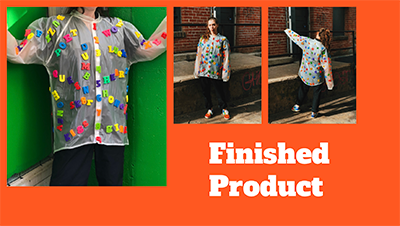 My initial idea was to do something along the lines of up-cycled fashion however I did not know exactly what I wanted to do whether it be a hat, a purse, a dress or pants, etc. I decided to go out to a thrift store to get some ideas. Thrifting is a favorite hobby of mine because you can find the most unique or basic things all for a lowered price! And since someone was going to throw it away anyway at least they can donate their trash to thrift stores so that it can become someone else’s treasure. So I looked around for inspiration, and I stumbled upon a bag of alphabet fridge magnets. I loved the colors and they reminded me of growing up with those on my fridge back in the day.

This brings me to my aesthetic inspiration for this project: the art form Kitsch. Kitsch is the German word for trash and is often used to describe cheap, meaningless forms of pop culture/commercial culture. It is identifiable by it’s cheesiness or tackiness, and appeals to popular or uncultivated taste because the forms are often garish or overly sentimental, simply meaning that these objects are considered by other people to be ugly, without style, false, or in poor taste but enjoyed or appreciated by still other people in an ironic or knowing way or because it is funny or recognizable.

Below is a sculpture of Michael Jackson and his beloved pet chimpanzee Bubbles by the artist Jeff Koons.