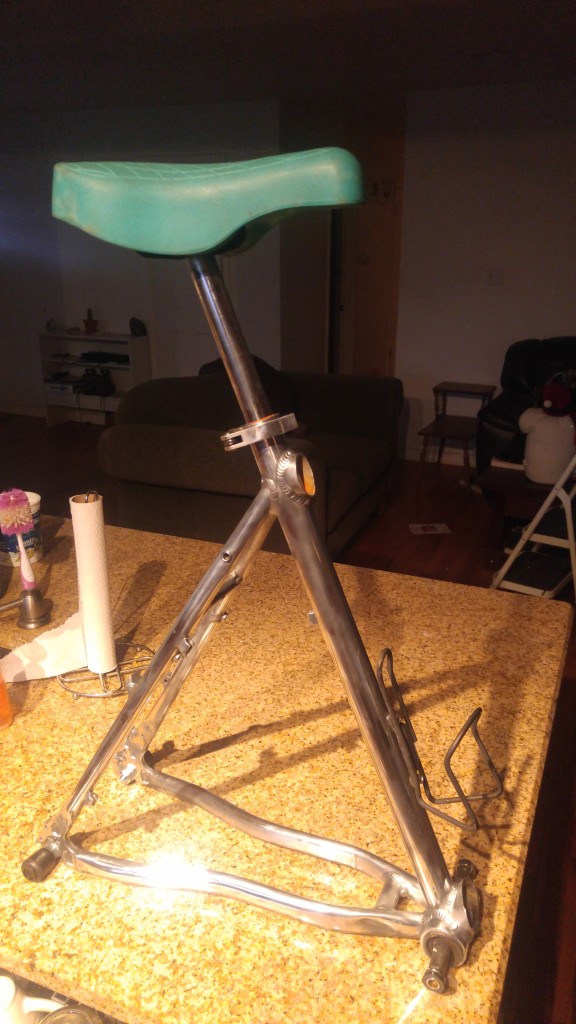 January 30, 2016
Albert Como
Student Work, Upcycle Project Report 2016, ZZ 2016
49 Comments
While looking at bike stuff on the internet, I came across these stools. I have some scrap frames and junker bikes, so I filed this away as a project. Realizing that there is so much more that can be done with these, I decided to switch away from Pine Can, a project I was never really satisfied with. In that respect, the non-linear aspects of our design loop are satisfied. However, it is ultimately a pretty linear project. I saw what I wanted, and made it. If I was really going to make a piece of furniture for the house, it would have to look like it belonged. I figured the niche would either be a bar stool, or a camping chair. As such, I decided to style it after a 1950’s chrome/vinyl stool. This is a timeless aesthetic that I figured would be more than compliant with my busy schedule. If they could make these in the 50s, I can make this now. Right now! I was wrong.

I started off selecting a frame. This old Fuji had practically no useful components on it, and would be more trouble to salvage than it would be worth. If I donated it, it would likely go to scrap. Furthermore, it was aluminum which should resist corrosion. I took a handsaw to it.

After the rear triangle was separated from the bike, I took some methylene chloride based paint stripper to it. A dozen chemical burns later, I got the following. This triangle was heavily bead blasted, and so it would need to be refinished.

Going from 180 to 220 to 320 grit sandpaper, I was able to achieve to following over the surface of the frame. Strangely enough, going with finer grit actually seemed to make  the finish duller. From here I went to a polishing wheel with soft, paraffin based, chrome compound.

The seat I found unfortunately had the seatpost permanently affixed. What’s more is the seatpost was too small to fit in the frame. I 3D printed this shim to fill the annulus.

With polishing done and the seatpost fitted, I pulled the cup holder off of the scrapped frame, resulting in this:

Overall, I like it. Was it worth the better part of 2 days and two lifted fingernails? We’ll see! It is definitely a keeper. Beats standing while I eat.