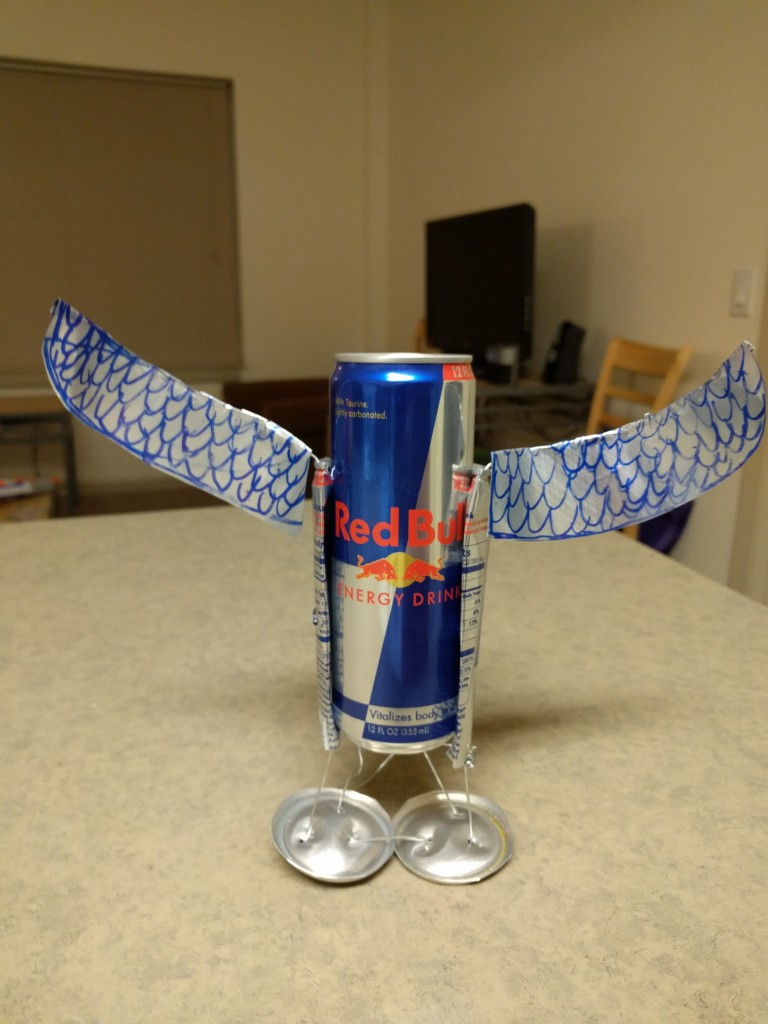 The upcycling process, for me, took some really interesting turns during the design process. I originally started off with the idea of creating art using cassette tapes and/or paper clips.

This proved to be much more challenging for me than I thought going into to project. I could not get the cassette tape to form the way I wanted it to. It also would never serve any purpose besides reusing old cassettes, which was less than ideal for me. I wanted whatever I created to do at least 1 thing, no matter how simple.  After some time I abandoned the cassette project and had to find a new one. Feeling the time crunch I was drinking a lot of caffeine, specifically Red Bull.

Then it hit me. Red Bull gives you wings! I love a good play on words, so I thought “What if I made an object that can hold a Red Bull that is made from paper clips, and an old Red Bull can, and shaped it in such a way that it had wings?”. From there, the rest was history.

In class we had a discussion in smaller teams, and then as a class, about the design process and its steps. The process my group and I came up with is as follows.

The flow of the process can be seen in the image below:

My design process for this project went more like this:

Overall the process was very similar. There was no problem, no release to market, no feedback from customers, and no market analysis. I created a need statement where this object had to have wings and hold a full can of energy drink. This also translated into requirements & specifications that it had to be sturdy, and other factors like that. I created some concept ideas where the body would either be holding wings in a set of hands, or it would have wings itself. I chose the latter over the former. My initial design would have wings on the body. From there I built a prototype that looked like it had chicken feet, and also was not sturdy enough to hold a full can. I’ll talk about how I solved that problem later.

I tested the prototype by trying to tip the object with and without a full can inside it. I took the results from those test, and redesigned and rebuilt the feet to be more supportive. Once I had that complete I tried to work on the aesthetics by smoothing out curves and other loose wires. Overall I feel that I followed a general design process fairly closely.

Inspiration from this project came from a few places. One place is a love for play on words that I have. This is what inspired the Red Bull holder to have wings incorporated into the design, since Red Bull has had a long running commercial slogan that “Red Bull gives you wings”, but there aren’t any wings on the can. The next inspiration came from other people making sculptures from old soda cans and wire.

My vision for this project was simple: Make an object that can hold a single, full, 12-oz Red Bull can that also incorporates wings of some kind. The object has to be stable enough so that it won’t simply tip over if it is bumped or the table is shaken.  Going off of these only two requirements and specifications, I went into building the stand.

Materials & tools used were as follows:

I ended up not using the exacto knife

First I built the framework that would support the drink. I started with the feet and legs

From here I build the “ribs” of the frame. These would wrap around the body of the can in order to hold it.

Making sure the ribs would be spaced correctly on the can

Completed frame and feet, not attached yet

After I had the frame done, I used two paper clips to form the profile of the wing and also attached the legs & feet.

Next I cut one of the old cans in order to hide the paperclip frame.

tools required to cut the top of the can off

After cutting down the side of the can, the bottom was cut off

Fitting the can to the frame, Front view

Fitting the can to the frame, Back view

Once the cover was attached, I made sure a can would still fit inside the body. Next I cut the other can and drew on it in order to shape the wings and give it more depth.

After some shaping the structure can stand on its own, however it is incredibly unstable.

From here I redesigned the legs and added a “kick-stand” to help support the weight. This new version is much more stable.

Comparing the final product to what I had envisioned in my mind, I have achieved parts of what I set out to accomplish. What I mean by that is that the stand is able to hold a full can of Red Bull without easily tipping over and has the correct play on words I set out to create, but does not look exactly how I’d like it to. Functionally I have achieved my goals. Aesthetically, I think it came close. It was a good concept and first attempt. With more time and a different wire type (not paperclips, ideally thinner gauge wire), I think that this could have potential to be a fun holder to be displayed. What is next for this project is that it will most likely be properly recycled.

Overall I learned a lot about how to work with paper clips, recycled material, and that things are not as easy in reality as they might be in your mind. It was important to me to have what I make serve a purpose and actually “do” something. I did not want just an art piece. While this does not necessarily contribute much in terms of functionality, it serves one purpose and is able to successfully complete it. That is good enough for me for only using recycled material.

This is custom heading element with Google Fonts