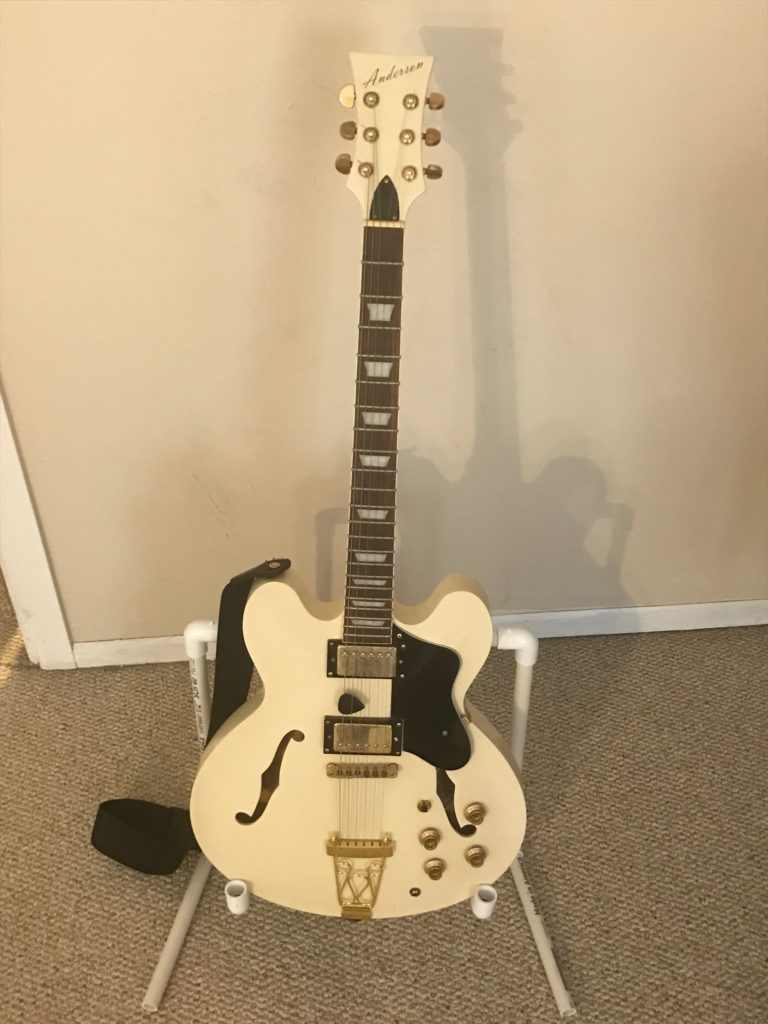 I started this project with the general idea to have something useful come out of it. Immediately after this project being assigned I started to brainstorm. I went through my house looking for something that I need, something that I would be willing to buy. This was a particularly hard task because I was trying to use exclusively remnant materials. The search was not going well until one night when I knocked my guitar over while doing laundry. Then it hit me, I need a guitar stand and since I currently have an electric guitar that I built from scratch, it seemed fitting to have a stand that I built from scratch as well.

My design process outlined in Figure 1. started with some preliminary sketching.

Initial sketching went well as I found several designs online that looked fairly simple and sturdy.These designs, seen in Figure 2 and Figure 3, served as primary inspiration for my designing.

When I started the quest to find materials, I had a lot of trouble finding materials that would be easy to work with, yet could support the weight of a guitar. While looking through the shed, I found some old PVC pipe that my landlord had used to make a sprinkler system for the garden. I immediately emailed him and asked for his permission to put it to use. Since there was only 2 pieces of pipe that were roughly 5 feet in length, it put several design limitations on my idea.

Once I had my materials, I began doing more detailed sketching, keeping in mind my design limitation of 10 feet total of PVC pipe. My final design as well as extra PVC connectors can be seen in Figure 5.

Once I had a design that used about 8 feet of pipe, I laid out which pieces to cut from which pipe to ensure that I could make the guitar stand. I used a simple hacksaw to cut the pipes to size. After I had pieced together the puzzle that was a guitar stand, I placed my guitar on it and watched a piece PVC pipe that was connecting the part of the stand that holds the guitar to the base had slid out of its housing. This was a weakness of the design, but was quickly remedied with a trip to home depot for some PVC cement. Some cement in the joints strongly secured the pipes and connectors.

Figure 7: Final product in use.

There were not any real design iterations other than the limitations set forth by the length of pipe I had access to. Going forward, I will probably cement all the joints for rigidity, but I have no plans to paint the stand. I did not really have a set aesthetic in mind, but to keep things simple. I think I hit that pretty well as it looks simple and kind of industrial.  I am pleased with how it turned out, but if I had to do it again, I would have designed something more stable and smaller.