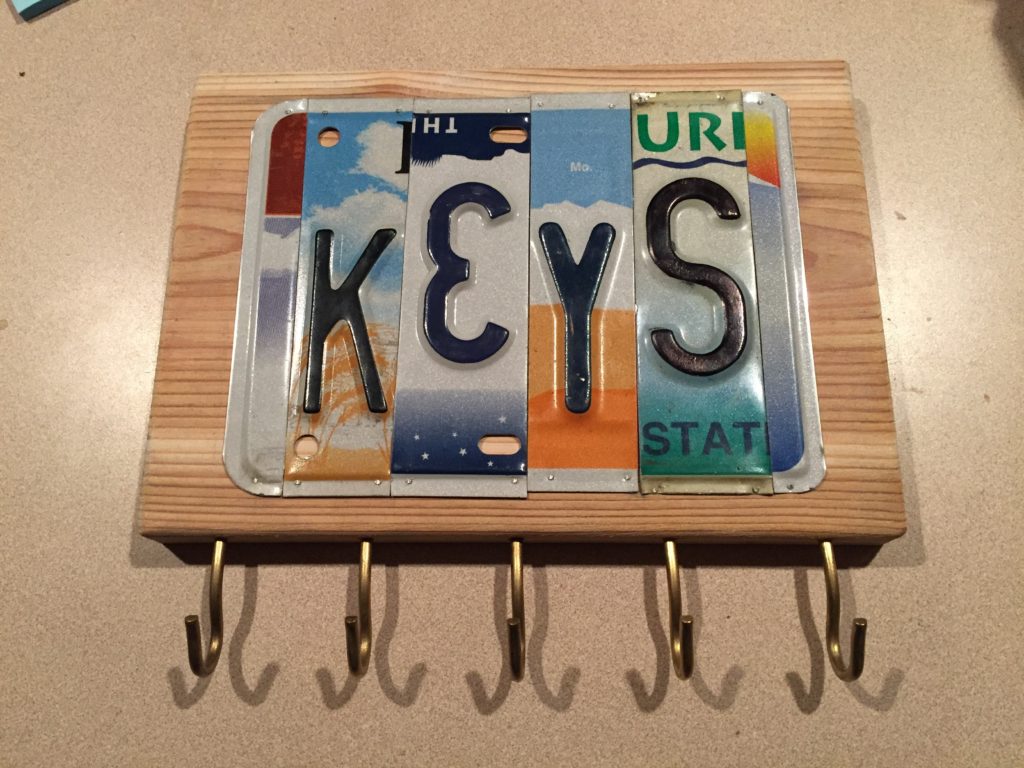 This project was called upcycling, because we were told to use recycled material to create it. I ended up using license plates as my used material. And after a lot of changing my mind, I decided to make a key holder.

In the beginning of this design process I was all over the place, I didn’t know what material I wanted to use or what sort of thing I wanted to create. All I knew was that I wanted to make something I would like and actually use. I start with an idea of making a coke can light fixture. But I didn’t have enough coke cans to make it. So instead, I decided to go to the recycling store in Boulder, Colorado. After looking around there I still had no strong creative inspiration. Then, on a weekend I was at my parent’s place and I found a collection of used license plates that they had acquired over the years. I decided on that being my material of choice. And then started researching ideas on what to make. Some examples are shown below.

After a descent amount of research, I decided that I wanted to make a key holder. I chose to use wood as my backing and similar hooks as in figure 2. Also, I found a cool process you can do to the wood called ‘Lichtenberg Figures’ shown in the figure below that I wanted to do with the wood background.

Having spare wood to experiment with doing and using a Baking Soda and water mixer, a neon transformer, and jumper cords, I thyed to produce the Litchenberg figures. But the wood I was using did not take and so I decided to not include that in this project. Also, as designing this I decided to move the hooks from the face of the wood to the corner.

My design process was loopy. As I started planning the design out and actually working on it, some things that I thought would look good didn’t, so I removed them. Other things just didn’t work, like the Litchenberg Figure on the wood. Things got rearranged and moved around, like the hooks and the placement of the license plate pieces. In other words my design process was all over the place. But that being said, I think it really good to keep altering your design as you go, you end up with a different end product them you expected but one that looks good.

I am happy with how it turned out so far. I think I would like to add to it later, maybe add some skeleton keys on the sides and add some paint so the wood isn’t seen. My goal was to create a project that I would use and I think I will use this key holder after I spend a little more time on it.