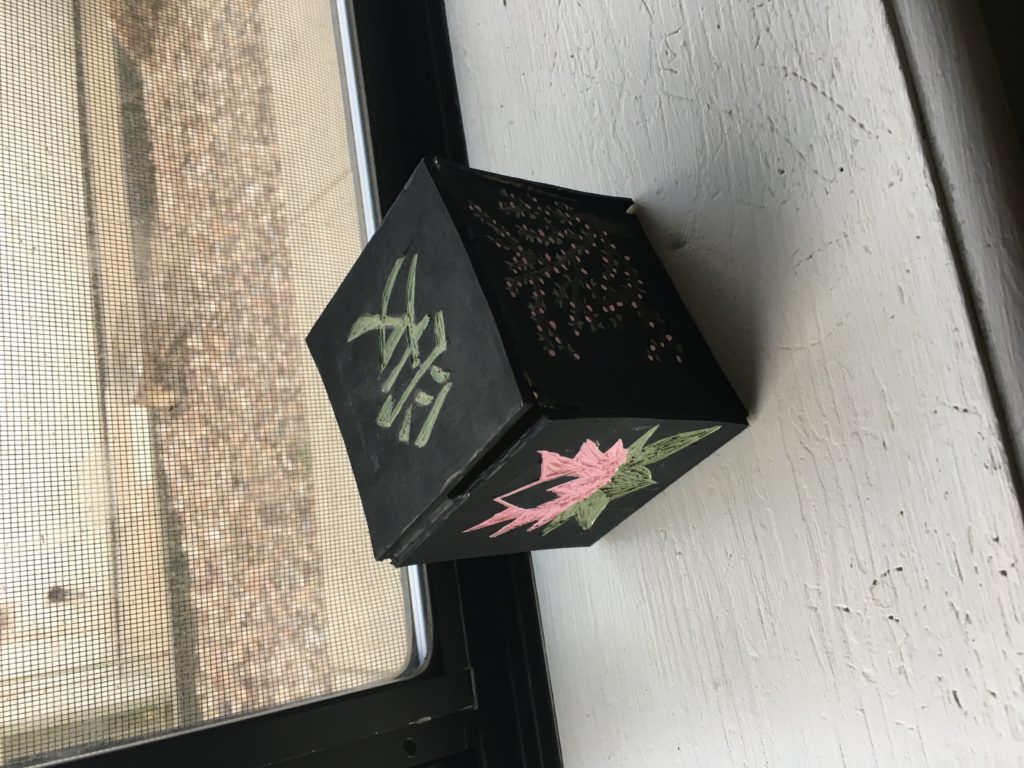 Originally, I planned to create my own mechanical puzzle for my final project. I drew inspiration from simple puzzles that I played with in my childhood. Due to time constraints, I decided that it may be difficult to come up with enough solution ideas to form an also aesthetically pleasing project. Therefore, I have changed my project focus to a Japanese-style jewelry box that incorporates a special mechanism to open a secret compartment. This idea comes from the inspiration to create a mechanical puzzle. I have chosen Japanese art because I have recently been exploring my interest in Japanese culture. I find the art form very refined and flowy — qualities that remind me of the beauty and elegance of jewelry.

I have already instigated a design change due to constraints. Often our most thought-intensive work happens at the last-minute, since, inevitably, things can go wrong. That is why the design change is important in the scope of time. Focusing on the Japanese aesthetic is a major constraint for me. I want to make something elegant (hopefully to give to my mother) that also represents its cultural references accurately. I have always taken an interest in Japanese culture, but all I have really been exposed to is anime — I wanted to explore beyond that. Materials are a constraint. I possess very few of the components that I want to use for this project, but I am certain that they will be easy to come by and few in numbers. Obviously I will need wood for the box. I’ll also need materials for the mechanisms that open the secret compartments, which are still to be determined. That being said, cost is a contributing constraint as well. Really high-end wood is expensive and as a college student, I can only afford to do so much. So I am setting myself a budget of around $50 for everything that I need to complete this project. Finally, skill is probably the most important constraint for my project. I am depending on being able to do a lot of woodworking, which I have done practically none of in the past. I also intend to do some wood-carving for the outer aesthetic of the box. I just picked up a carving kit for the first time a couple of days ago, so I am going to have to learn quite a bit about working with wood in a relatively short time frame.

The procedure for creating the prototype was relatively simple — it required only wood, a carving kit, acrylic paint, and wood glue. I obtained a small, thin strip of basswood and sectioned it off into 3″ x 3″ squares along the wood, by measuring and marking with a pencil. I decided to keep the strip intact during the process to make it easier to handle. After sectioning off the wood, I painted the first square black — the base for my aesthetic. I chose matte black as the background both because it was a common theme I found in an internet search of “Japanese Jewelry Boxes” and because I believe it adds to the elegant and somewhat serious nature of the aesthetic I am going for. I then proceeded to carve out random branch-like shapes to create the outline of a tree. The inspiration for this design can be seen in Figure 2, directly next to my design in Figure 1.

I really connected with the organic, flowy aesthetic that also proves itself to be refined and regal. I wanted to go with my own interpretation on how the box opens (top opening rather than drawers/cupboard) because I felt that it would make creating a secret compartment easier.

After doing my best to carve out a nature-themed, Japanese design for four of the sides, I used acrylic paint in woodland brown, forest green, and cherry blossom pink to paint in the carved portions, creating texture and depth that makes the features appear more realistic. For the top of the box, I included what I believe to be the Chinese letter for love on the top face of the box. I intended to use the appropriate Japanese character, but I think that Google may have led me astray. I used this letter because after deciding to create a jewelry box, I became determined to make something nice for my mother. Love was the one word I could think of that conveys the meaning I feel in giving this box to my mother — “mother” didn’t feel personal enough, and she is so much more to me than just a mother!

To assemble the sides of the box, I used wood glue on each of the edges until I had a fully assembled, stable box. A few of my friends pointed out that the sides were uneven or warped. This is mostly due to the fact that I did not use clamps when drying the wood glue, but merely held each side up for a couple of minutes. For the final project. I intend to make all of the edges coincident and to either use a mechanism that requires no wood glue, or use clamps to help the glue dry evenly and correctly.

The prototype itself is not functional — it is completely glued together, so it does not open. However, the final project will feature a hinge, a lock/latch, and a mechanism for opening a secret compartment. That being said, the prototype also does not have any internal features. I plan to drape some sort of red, silky fabric on the interior of the box likely along with a small amount of padding to reduce snags in the fabric and prevent jewelry from falling hard onto the wooden surface. The red is an aesthetic choice meant to enhance the elegance of the box.

I feel as though I achieved my aesthetic goals for the prototype in that I wanted to produce something that would convey the color scheme and basic design of a Japanese jewelry box. While there is still much work to do, I know now what changes and improvements I want to make to the aesthetic of my box. I hadn’t planned on making the prototype functional because I was more concerned with displaying the aesthetic. The final outcomes for each side can be seen in the images below.