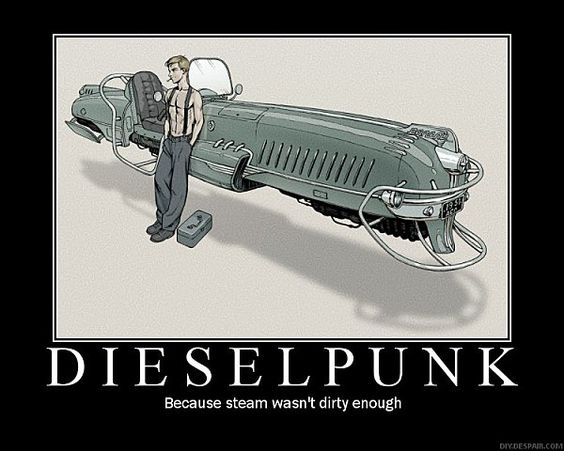 The steampunk aesthetic is to steam as the dieselpunk aesthetic is to diesel. It is important to understand both aesthetics as they are considered to be close cousins. The steampunk aesthetic deals with industrial steam power found in the Victorian era mixed with attributes of Tesla and sustainable energy. Dieselpunk draws from the interwar period that saw the use of diesel powered machines and major weapon development between the World Wars. An easier image to consider is a reimagining of The Great Gatsby in a cyberpunk world that results in Dieselpunk.

The images above depict a propaganda painting created in the dieselpunk aesthetic compared to The Great Gatsby artist rendition of a film poster. The font is very similar and this poster can be easily compared to the next few images that are created with this aesthetic in mind.

The meaning of the word dieselpunk is broken down into diesel, for the use of diesel machines of the time, and the work punk that makes up a class of counterculture nature with opposition to contemporary aesthetics. The futuristic qualities combined with the older designs of cars is a major contributor to the dieselpunk aesthetic.

The overall characterization of dieselpunk is most closely related to steampunk but it derives from a different time period. This results in a dirtier and darker tone that contrasts the organic curves of the futuristic machines. There are hints of color but this time in history was ruled by the development of weapons and fear after the first World War and leading into the next. This darkness is seen throughout and also creates a pleasing contrast in the darkness. Creating an image with the dieselpunk aesthetic creates a unique image that inspires creativity in its fresh mix of organic and abstract structure throughout each composition. This can absolutely be applied to a physical design through the combination of rigid and soft lines with hints of color in the darkness.