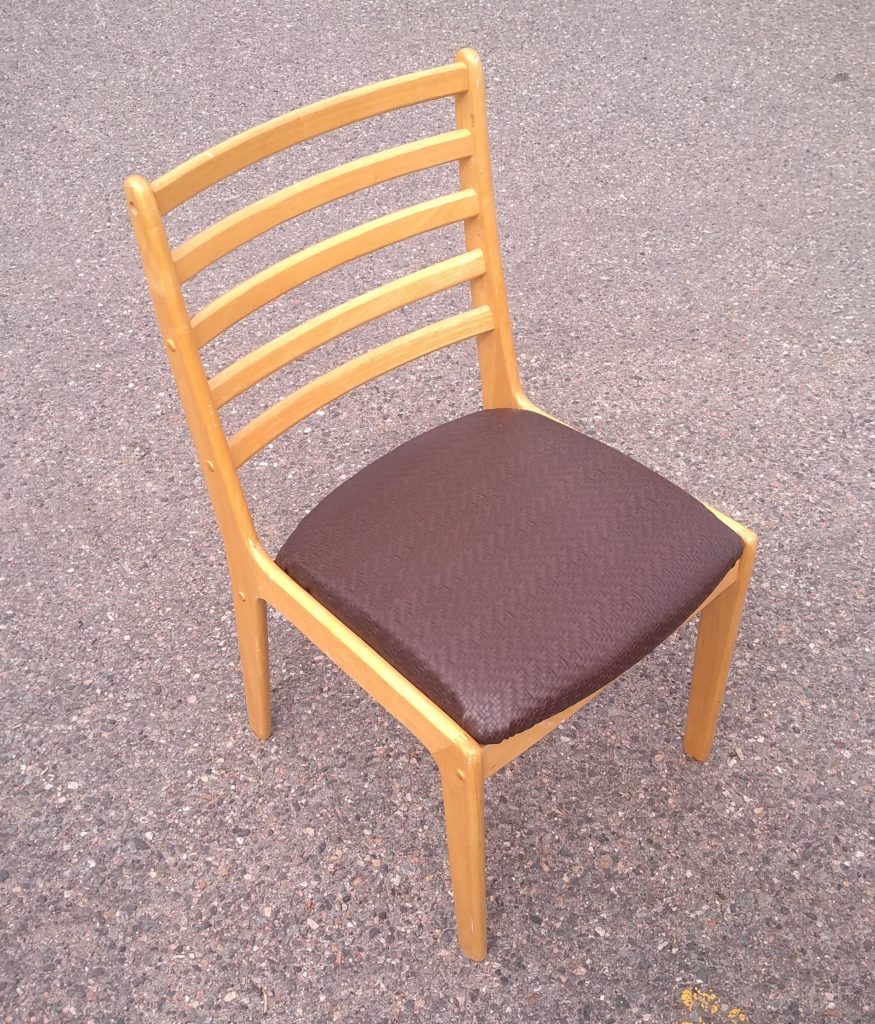 SuperLounge Interactive Musical Chair: What and How

Monks sit to meditate. Families sit at the dining table for a nice meal. Bros sit on the couch to play videogames. Students sit at desks to learn. Now you can sit – just sit – to play music.

The Superlounge Interactive Musical Chair is an exploration into the creative potential of sitting. We use pressure sensors hidden in the cushion to detect weight distribution throughout the chair. These sensors transmit to a micro processor to output MIDI commands, a protocol standard to the digital music industry.

Originally I had ambitions to build my own chair. My initial idea involved building a scale model of a valley that someone could sit in. This proved insurmountable given the time I had available for this class. I looked at chairs being sold at thrift stores and came across some good ones. However cheap they were, no price is better than free – I settled with a chair that was laying unused in storage. It had some stains on it and the upholstery made it look disgusting to sit in. I wanted to fix that, while also embedding my pressure sensors into the cushion. I decided to sandwich the sensors between the old foam cushion and the new one as a way for the pressure sensors to pick up data from a broader area than just on top of the sensor.

I got both the fake leather and the green 0.5″ foam for about $13 from Joann, using sales deals from their app – enough to make two chairs! I also got 8 pressure sensors from Sparkfun because I misplaced 4 of them – but found them buried in my AesDes folder. Each was valued at $7. No lost cost – that just means I can make more chairs.

This was the first time I did upholstery, and I learned a lot. I approached it by stapling the centers of the edges first, pulling the leather tight in between, and stapling the middle of the subdivisions. When it came to corners, they were a bit tricky, but the method I used remained the subdivision method, but instead stapling perpendicular to the edge. This created a fanning of the material that ended up looking a bit intrusive, however the edge of the seat had no wrinkles.

I took the example code and schematics from Sparkfun and basically quadrupled it in parallel. I honestly did not test it (besides with a multimeter) before I made the final soldered product – my high faith in my soldering ability thankfully paid off. It took SOOO long to solder! It was partially due to the fact that I hd to try several different methods before it “looked right.” I feel like in some ways I pulled a Steve Jobs in that I made sure every last solder joint and shrink-wrap looked pleasing even though they weren’t going to be shown. Hopefully that plays into the longevity of this artifact. It’s quite amazing to notice every little aesthetic decision that’s made in a project.

My buddy Cooper showed me how to use a hand drill to twist wires (one end in vise, other end in drill chuck, and pull the wire taut), because I only had those green and black wires available to me in quantity for free. I had to solder as little as possible onto the sensors or else their plastic covering would melt. I also chose to put them in small bags to protect them. I made my own custom-sized small bags by turning the soldering iron to its lowest temp and drawing borders on a regular ziplock bag to weld the from and back together. Then I cut it using scissors, ensuring the borders had sealed edges. These were just a handful of the manufacturing tricks that I learned along the way.