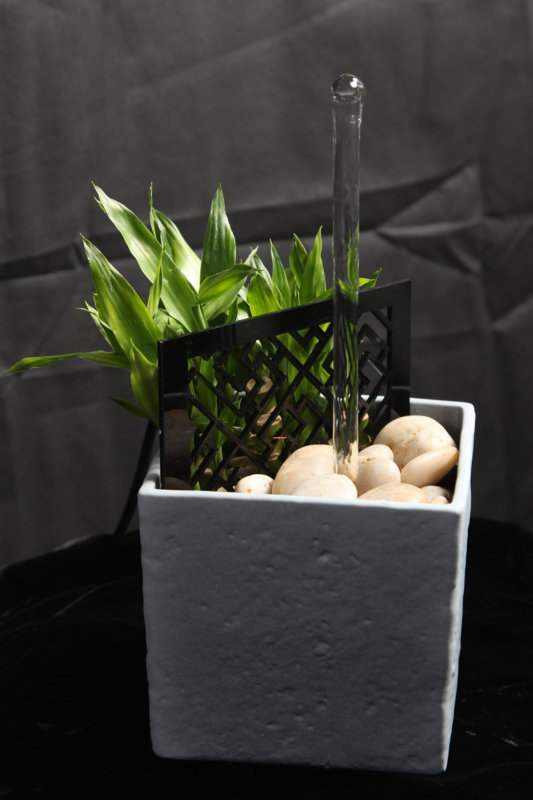 Chinese Garden Fountain: Why & What’s Next?

I initially intended to have architecture incorporated into my design. I wanted to make a structure from small wooden sticks. I decided against this because I wouldn’t be able to capture the complex detail of the structure. I would rather forgo something than to completely butcher the execution in this case. I also wanted to add levels for the water to pour down. I decided that the straw was a good dynamic element by itself. The trelliswork window came out really well and looks almost exactly how I imagined it in the beginning.

From this project, I learned that creating your own fountain is not that difficult. The pump was built to be quiet so there was no extra work in implementing it. There are also suction cups on the bottom that keep the pump in place. This project could really be done with any bowl, too. You could go to the store and pick out any closed bowl and use that as a base. The scope of aesthetics that can be achieved with this product is widened because of this. I learned a little about the Chinese garden aesthetics and realized that there is a lot of information out there. The meaning behind the garden is more important than the garden itself, which is not exactly what I did with my project. From this class, I learned a lot about design principles and different elements of sketching. Perspective and type of material is the most difficult thing to achieve with sketching and it takes a lot of practice. The “meditation” practice in the beginning of the class was helpful in clearing my mind and giving a better sense of direction in the class.

What will happen next with my project:

My project currently resides at my desk at work. It’s in an office that doesn’t receive a lot of sunlight, so I may have to get a light so the bamboo won’t die. I may also move the project to my desk at home where the light is much stronger. Now that I understand how to make a fountain, I may make more as future gifts. My mom has cats so maybe I can incorporate catnip as my greenery and the cats can drink from the fountain. I may also be able to bulk purchase some of the materials and make more for others in my office. I could also work at shrinking the size and customizing the product. It’s not difficult to do that!

The implementation was overall successful. I achieved a nice sleek look and the black acrylic doesn’t diminish the look like I thought it would. If I had used metal, it would’ve taken much more time to form and the whole product would’ve been heavier. It’s already pretty heavy so I’m glad I went with lighter material. This project was also successful in making it easy to troubleshoot. There is modularity which allows me to take the whole thing apart and clean the pump or replace the bamboo. The pump was also quiet which is successful in its own way.

I wish I was able to better center my straw. Very few people will notice this detail, but I notice unintentional asymmetry. I would like to intentionally put is to the side or directly center it. I also wish I was able to find cheaper options for some of my parts. The total was about as much as a regular table top fountain but the bamboo will eventually need to be replaced and the acrylic would’ve been expensive is I didn’t already have it laying around.