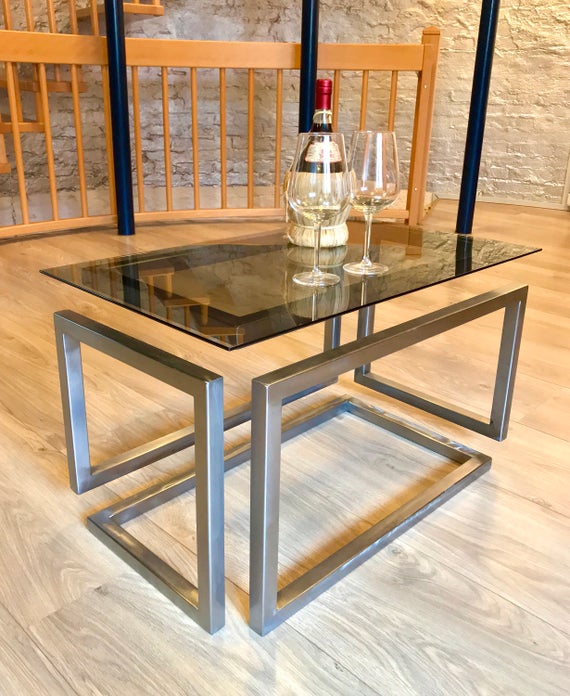 Because I have been so busy lately between the Upcycle Project, my senior design project, and my other classes, I haven’t had much of a chance to think about the main project. When I began brainstorming ideas for the project, I quickly got frustrated as I could not think of anything, when I felt that ideas should have been flowing. Between the amount of interesting creations I see on social media, and the amount of times I wished I had some weird invention to accomplish a trivial task, I was sure I would have many ideas to choose from.

After brainstorming for a bit and looking back through my saved social media posts, I managed to come up with a few ideas that are feasible for this project.

The main idea I had, which is a project I have wanted to attempt for a long time, is a metal coffee table featuring an optical illusion that makes it look like it has no beginning or end. Pictures of the inspiration are shown below.

From Left to Right: The original table design I wanted to attempt, A nice finished version of the infinite coffee table

In an effort to make the project more my own, and to incorporate a dynamic component, I was thinking about potentially adding drawers underneath, or even making the table surface dynamic in some way. I was also thinking I would use wood as the surface material, as my friend’s dad owns a tree company and regularly makes amazing furniture from wood. I think it could look really good with the metal base, and it would be very helpful to have an experienced advisor. I have no idea how this would end up, as it is a rather ambitious project, and would require a fairly significant amount of time to complete.

The next idea I had was to build a stand for my PC, as it is currently only sitting on some scrap cardboard to keep it off the carpet. It is fairly common to have a stand or rack for a PC that is in a carpeted room, as the carpet can potentially block airflow or create static electricity that could damage components. This kind of product could easily be found in many forms on sites such as Amazon or Newegg, but the quality is very variable and they don’t look all that good in my opinion.

This kind of basic stand would be fairly simple to build, as it really only has to elevate the PC while keeping it stable. If I were to pursue this project, I would likely implement a sliding rack within a stand that fully encases the PC, so I could slide the PC in and out of the stand for easy access. I would also like to include RGB lights somewhere in the project, as it would match my PC and make it stand out from store bought options.

Even after my brainstorm session and putting a lot of thought into these ideas, I am still not entirely sure what I will end up doing. I would like for my project to be something I can use in my daily life, and something that I will be proud of as an engineer.