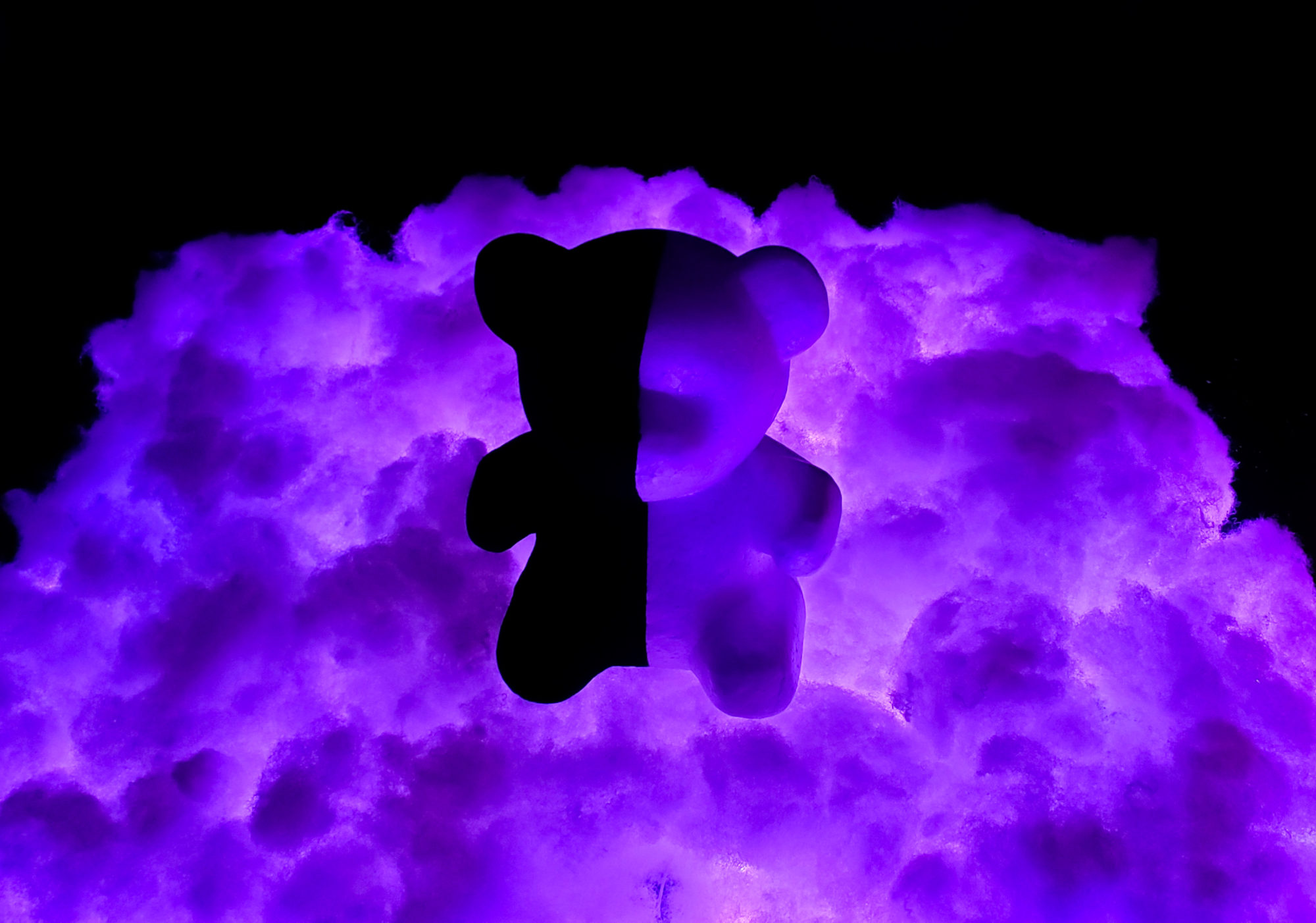 For my final project I created a rotating sculpture that highlights lighting and depth effects. The aesthetics that I was trying to highlight are matte black and a neon LED look. In order to achive my matte black look I am used a specialized paint that is supposed to be extremely dark. I was hoping that it would absorb a large amount of light and create an intriguing depth effect while the sculpture is rotating.

The second main aesthetic I incorporated into my project was a LED gamer type aesthetic. I chose this because I thought it would pair very well with the matte black I was planning to use. The goal with these two aesthetics was to create a visually stimulating contrast between light and dark.

In order to combined these elements together my plan was to create a bear that is half painted black and half white that is rotating and floating on top of an LED cloud.

Two of the main specifications I had for my project were I wanted the bear to look 2D when viewed from the side that is painted black. This would only be achieved if I can get the paint dark enough to completely absorb all of the light.

Secondly, I wanted the bear to look like it is floating. When it is rotating I did not want the motor to be visible when it is turning. As well I wanted the LED cloud to disperse the light fairly evenly.

In the end I was able to achive both of these two main constraints. I will now walk through the overall process that I used to create my end result.

The first thing that I did was paint the bear. I was worried that the paint might not work very well on the styrofoam but that did not turn out to be an issue. I used a piece of tape on the bear in order to get a fairly straight line down the middle. After one coat the paint did not look as black as I hoped, but I left it to dry over night and then put on a second coat. After this second coat I was able to get the desired finish.

The next step was to modify the bear such that I could get it to spin. In order to due this I put a small RC car wheel into the base of the bear. I then connected a DC motor to the wheel and added  a switch to be able to turn on and off the rotation. These parts allowed me to create the dynamic element of my project.

The next step in the project was to create the LED cloud. In order to due this I taped down LED striped lights in a spiral in order to try to get a uniform light. Then I placed stuffing over the lights to try to emulate the look of a cloud in nature.

At this point I was ready to put all the parts together. I placed the bear in the LED cloud and made sure everything was looking how I wanted it to. Below are a few photos of the final result with different LED colors.

After taking the photos I also captured a video to show off the rotation of the project. A small warning, the video has a lot of flashing which is due to an unfortunate aliasing effect between my camera and the LED lights.

Ultimately my project turned out nearly exactly as I was hoping that I would. I think that the LED lights and the matte black paint created a very visually striking effect. I think that the black paint was able to absorb enough light to make the left half of the bear look 2D, especially in photos. As well I think that the motor was very well hidden and the bear dose in fact look like it is floating on top of the cloud. The main change that I would consider in the future is further work to be able to better control the speed that the bear rotates at. I was planning to use a potentiometer that I had to control this, but unfortunately the resistance was too high for my application. This aside I think that the project was very successful and did a great job of highlighting the aesthetics that I was working with.

Below is the video of my final presentation given to the class: