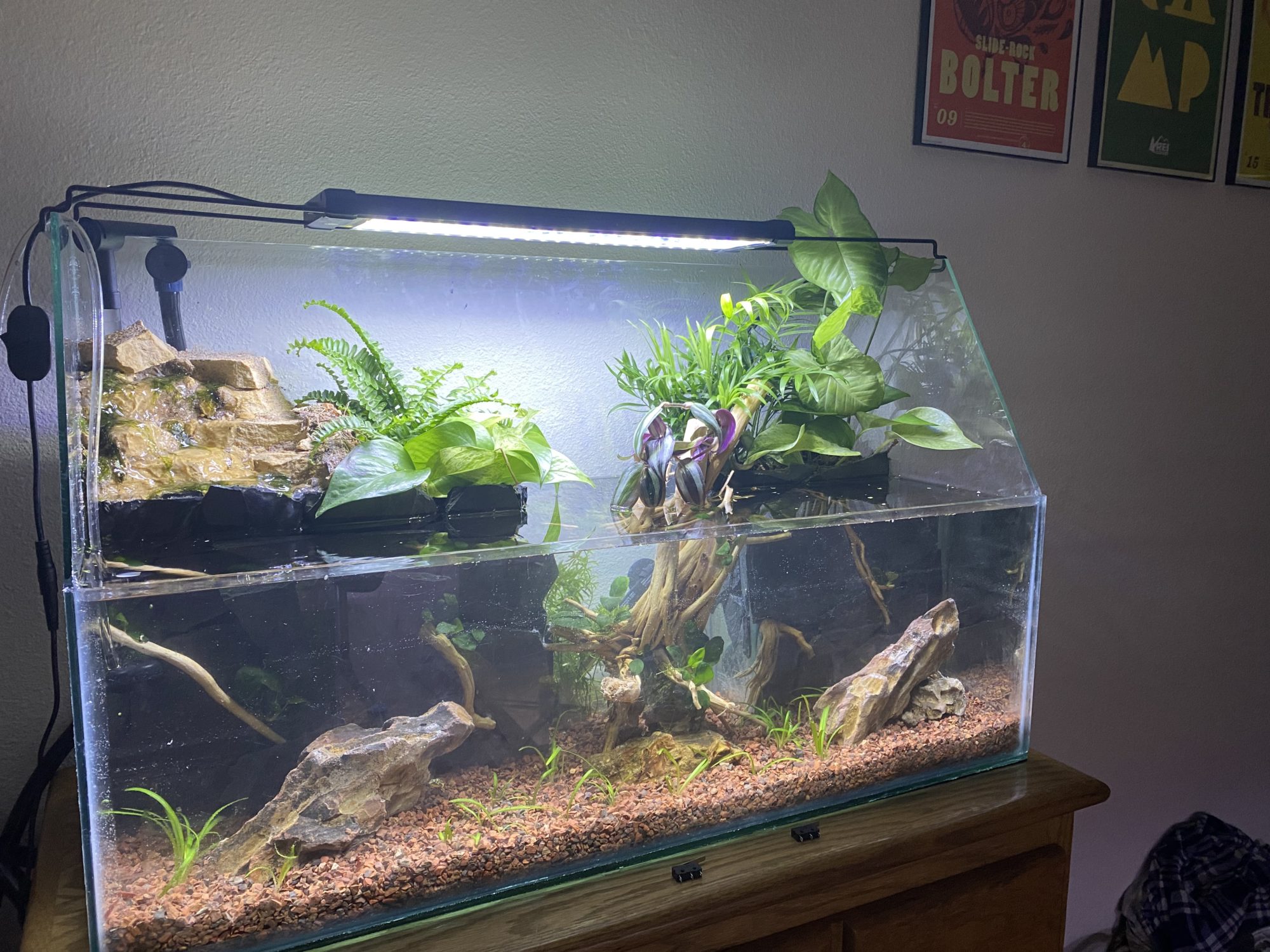 A paludarium is the combination between an aquarium and a terrestrial terrarium.  I have been in the aquarium hobby for over 12 years now and paludariums have always caught my eye.  Growing up I only ever owned aquariums that were created with false plants, plastic hides, and beginner fish.  Starting sophomore year of college I started to see the aquarium as more of an art piece rather than a simple home for the livestock.  This meant that I started experimenting with driftwood, natural rocks, and most importantly live plants.  Its somewhat difficult to set up your first aquarium  when using these natural aspects.  There’s a certain level of balance that one must achieve when creating an ecosystem like this.  Your have to carefully choose the amount of nutrients that’s in the substrate, the amount of light each day, and finally the amount of CO2 you inject into the water if so chose to do that.  Paludariums are typically created for animals such as reptiles and amphibians.  This allows them to have a basking area on the land with plenty of space to explore in the water.  I have never owned any terrestrial pets so this paludarium will be created for the sole purpose of housing my fish and shrimp.  The land area will act more as a pleasing viewing aspect.

This tank will be home to both of my Indian dwarf Puffer fish (Penelope & Pascal) and a handful of red cherry shrimp. The Puffer fish also known as the pea puffers are one of the only puffer breeds that can live in fully fresh water and they only grow to the length of about 1.5 inches.  The cherry shrimp also live in freshwater and readily breed.  Out of all of the breeding projects that I have going on at my house they are by far the easiest.  I keep them in all of my tanks because they eat all of the unwanted algae that grows and becomes an eyesore.  They are also helpful in the pea puffer tank because the puffers are natural predators.  They are too small to bother the adult cherry shrimp which are similar size, but since the shrimp readily breed, the babies are a food source for the fish.  This may seem bad at first considering that they are my pets being killed but it is very good in the long run.  First of all the baby shrimp are one of the most healthy and nutritious food sources for the puffers.  Second they trigger the natural hunting instincts of the puffs which prevents them from getting bored in their environment.  Next, the shrimp population need to be put in check or else they will breed so much that there will not be enough food for them to survive.  The population gradually grows due to the large amount of hiding places for them to avoid the puffers.  When in doubt I can always feed the larger shrimp to larger fish that I own or move them to another tank that needs a population boost.

I took inspiration for this idea from several different places including online forums, youtube, and books that I own.  The forums is the best resource for asking questions and finding inspiration that you wouldn’t typically see from the popular internet creators.  I could also ask questions to people that had run into similar issues in the past.  The youtubers were another huge inspiration source for me because the most popular ones always do really clean work and it gives me something to strive towards.  If I were to ever become a content creator I would most definitely do something in the aquarium hobby.

That being said I was confident going into this project that I would be able to make an adequate aquatic system.  However, I was not so confident in my ability to create a good looking terrestrial land area.  I do not have a good track record with plants that need to be watered.  This is why I chose the aesthetic of jungle.  Jungles are always moist and humid meaning that  it is difficult to over-water the types of plants that live in these areas.  These plants can readily be found at your average nursery and with a little bit of research I was able to determine what would do best in the type of setup I had planned.  To go along with the jungle aesthetic, I also had to make all of the planting and hardscape very dense.  With lots of variety of plants, the setup would have a sense of scale and realism.

The dynamic part of this paludarium is going to be a waterfall that recycles the filtered water for the aquatic section.  I decided to go with a slow, gradual moving waterfall that would keep the noise level in my house down, while achieving the goal of having the running water.

I started this project by being lucky enough to receive a 29 gallon tank for free from a family member.  The tank was old and all of the silicon was peeling out of the joints.  I decided to remove all of the rims from the tank and take the panes of glass apart.   This took me far longer than I had expected because I needed to scrape off every last bit of old silicon left on the glass.  All in all, the tear down of the tank was about 8 hours.  This left me with 5 panes to create the new tank with.  After I took apart all the glass, I made some drawings of the tank to determine the size of the land area that I wanted, and also the shape of the walls. I didn’t want this tank to look like all other tank that were on the market.  I wanted to make the tank so that it wasn’t just square.  I decided to cut the front pane of glass so that with the built up humidity, the view would not be obstructed.  After I cut the front pane, I cut the sides at an angle so that they met up with the front in a smooth, classy looking fashion.  To cut the glass I used a scorer and oil to make a slight line to snap the glass.  This was for sure the most nervous that I was the entire project because I had never cut glass and I didn’t have any extra.  In the end, every cut turned out perfect!

Next I had to plan out how to make all of the plumbing work.  For this is decided to use an external canister filter to clean the water in the tank.  I had to install a bulkhead into the bottom of the back pane of glass for the inlet of the filter, and then hook the return for the filter up above the waterfall.  In order to do this I had to order a special diamond tipped hole saw to cut the correct size hole in the glass.  This process was much simpler than I thought it would be.  After installing the bulkhead, I also attached a ball valve before connecting the hose.  This allowed me to control the flow of water to the filter and even disconnect it without the tank leaking.

Finally it was time to assemble the tank.  This was a two man job so I recruited the help of my roommate.  He held the panes of glass while I used silicon to connect them all.  After combining all of the panes of glass I ran an additional bead of silicon along the inside seam to ensure that it was watertight.  The silicon turned out to be far stronger than I thought, even being able to lift up the entire tank, which weighs around 30 lbs, by a single panel.  After allowing 24 hours for the silicon to cure I water tested the tank and was pleasantly surprised that it held water perfectly.

Next I had to assemble the planter boxes to house all of the terrestrial plants.  This was one of the most difficult sections to plan.  I didn’t know how I wanted to give the plants deep enough soil to root in while keeping the water out, and making it all look like an integrated bank.  I decided to go with 2 seperate planter boxes that would be as tall as the entire water section.  I used extra glass that I had leftover and a little bit of acrylic that my roommate gifted me to make these boxes.  I decided to go with two planters instead of one to make the water area larger, and also leave room to hide a heater and inlet of the filter.  On the outside of the planters I attached smashed tile to hide the eyesore that they are.  This made it look much more natural.  Then on the outside of the tile I added small pieces of driftwood to make it look like there were roots pushing through the background into the water area.

After completing the planter boxes I moved on to making the waterfall.  I made this out of a single sandstone paver which i broke into many pieces.  I stacked these pieces into the general waterfall shape that I wanted to achieve.  The hardest part about this process was making sure that the water did not leak from the  waterfall section into the planter area.  This would make the soil too moist and cause problems for the plants down the road. I did this by siliconing the rock layers together and then sealing them off with pond-safe spray foam to fill the remaining cracks.  After several iterations and testing for leaks I was finally able to completely seal the waterfall.

Then I added a drainage layer to the bottom of the planter area to catch all of the water that runs through the soil.  To separate this area from the soil I added a thin layer of carbon fiber mesh to make sure the soil did not fall into the drainage layer.  After that was all set I could start planting the terrestrial plants.  I used the larger leaf plants in the back with the smaller in the front to add a sense of scale.

All that was left to do was set up the water area and add the livestock.  I set up the remainder of the driftwood and decorative rocks to achieve the jungle aesthetic I was going for.  All the plants in the water area were harvested from other tanks that I owned.  At the moment it is not very densely planted but in the future the grassy looking plant on the bottom will send out runners and completely cover the base of the tank.  Finally it was time to add the fish and shrimp.  They fit in well with their new home and look very good.

Overall, I think that this project was a huge success. I’m thrilled with how everything turned out and I think that I did well on meeting my aesthetic of jungle.  The land area is densely planted and the water area will be there soon!