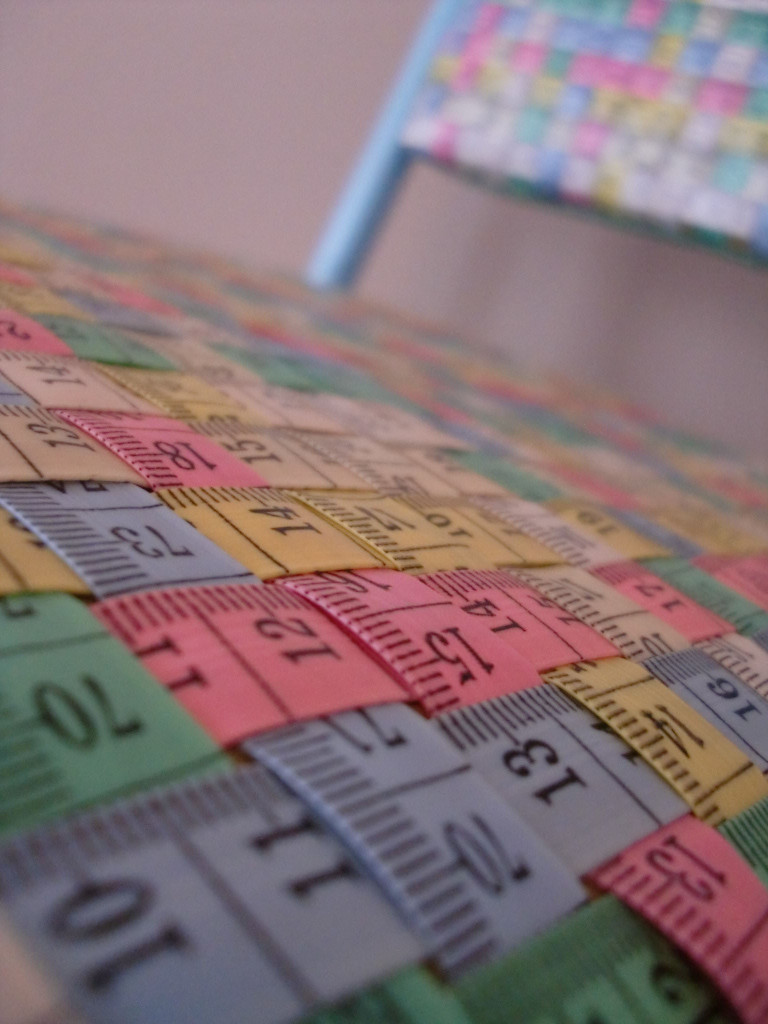 In Hong Kong I came across this shop called “GOD” (Goods of Desire) selling handbags made of woven seamstress tape measures. It was a clever way to make a durable product, but like most things at GOD, these bags were extremely over priced. Sometime later in the Guangzhou fabric district I came across the same tape measures, but this time they were sold in bulk rate! So I bought a bunch, thinking it could be a fun project.  I’ve had these tape measures sitting in storage for years. This project has finally given me the motivation to use these tape measures to create something.

It doesn’t seem like GOD is still selling those bags, but I found some other examples of similar stuff for reference.

I chose to go for a shabby chic aesthetic, following my post in the first class assignment in aesthetic exploration. From the beginning, I wanted to create a functional chair that would serve as a real piece of furniture rather than just an art chair. The final result does fulfill this functional requirement. The chair itself is robust and the woven tape measures are a durable material that should be able to withstand normal use. Artistically, the chair seems to achieve a shabby chic feeling. The chic part of this label refers to elegance and sophistication, which is usually a result refinement and hard work. The shabby part refers to something unpretentious and folky. This chair has qualities of both shabby and chic – mission accomplished. It could seem random to commandeer a bunch of tape measures to create a chair, especially considering that the extend of my sewing experience is reattaching a button to a shirt. But I created this chair to give to my mom. She has a cute sewing room where this chair will make a nice accent.

The design process depicted above shows divergent exploration followed convergent narrowing of possible solutions. The interior shows the iteration loops, which is an unbroken thread throughout the entire design process. Milestones are shown by the meeting of red and blue lines. Divergence and convergence segments are so distinct because the during the work flow, activities such as market research, brainstorming or workshops are inherently structured to proliferate ideas or identify as many opportunities as possible. The output of these activities feed into a funnel, grouped according to affinity and prioritized – narrowing the focus to manage the execution of ideas. As constraints are set (shown in diagram as the narrow bottle neck in the middle) they are used as a springboard for further exploration. Iteration on the other hand should not stop even when solutions are being refined for milestones. Overarching project objectives to either to launch a product to market or to complete a school project by a given deadline make the design cycle directional and finite. What is interesting to note about this diagram is that the initial exploration on the left results in a narrow focus that expands even broader as the project drills down into specifics.

While the seed of inspiration was found in a hand bag with an exorbitant price tag, I would not say that was the point when divergent exploration began. The upcycling project really began the day I found bulk rate tape measures in the fabric market in China – during a completely different project’s design process. Prior to that, I wasn’t thinking about weaving tape measures or reupholstering any furniture. Still reeling with sticker shock and now with access to so many cheap tape measures; this is when the numerous possibilities began to flood my mind (divergence). Different types of applications could use woven tape measures, but many projects like handbags were ruled out simply due to lack of interest (convergence). The chair is the quintessential object of design. And the chairs of China left a great impression on me. What impressed me most was that regardless of the chairs’ condition, they were never considered trash; people always seemed to find unique solutions to prolong the life of the chairs. The streets of Shanghai are filled with chairs in ruin – but still in service. This impressed me so much that I self-published a coffee table book titled “Have a Seat” showcasing the chairs of China. For those who are curious, you can preview the book at Blurb: Have a Seat.

Above: Excerpt from “Have a Seat” by Jason McGrath

The prospect of creating a chair constitutes the first milestone in this project. I then had to diverge on the type of chair it would be. As I experimented with weaving a few tape measures the appropriate size and shape for this project became apparent. It was clear that a fully upholstered arm chair would not be feasible for amount of tape measures on hand. Furthermore it was decided that any chair with a backrest must have two separate cushions for easier recovering and also to tie the aesthetic of the chair together. These two constraints: small in size and rectangular in shape would be considered the next milestone in the design process.

From here, I began to broaden my horizons again as I searched for chair candidates. It would have been great to create a matching set of 2-4 chairs or bar stools to provide more value for customers going for a unified interior design theme. Unfortunately I didn’t find a set that would fit the design constraints of this project. There are a lot single orphan chairs on the second hand market, which opened up more possibilities. Below are just a couple of pictures from chair hunting.

I settled on a small kitchen chair with two separate rectangular cushions.

The building process began by rounding up the tools and materials required for the job. Each tape measure has a metal tab on the end that provides a robust connection for nailing them to a surface. About 40 tape measures were nailed to a board in a straight row. Care was taken to arrange the tape measures in a pattern according to color. Next, I began weaving the tape measures across the rows following the same color pattern and trying to keep them tight as I went along. The weaving was all done by hand, basically threading one tape measure over and under perpendicular tape measures. Weaving the bands was a very linear process. I did not explore many different options on how to go about it. The only fork in the road was the issue of how to keep them all together once they were woven. Unfortunately, I do not have any experience sewing and felt that time was too constrained to learn during this project. Sewing the edges of the newly woven material would have been my first choice, and would probably be the right choice for manufacturing. The other choices I explored were gluing the ends of the bands together, and using clear tape on the back side to hold the bands together. I was afraid that the tape’s adhesive might be exposed in the gaps between the weave, which could have captured some fuzzy lint when people sat down. As it turns out, there is a fair amount of adjusting the bands as they cover the cushion in this adhoc process. So individually adjusting  each strap and fixing it to the chair with staples on the bottom side of the cushion worked well in this project. Sewing the edges or otherwise securing the weave before adhering it to the chair would require more coordination between the design of the cushion and the pattern used to create the cushion covers. Systematically designing the cushions and covers to fit each other would be the ideal design scenario.

The frame was painted early in the process so it would have plenty of time to dry. The chair’s feet and end caps were masked off to avoid over spray or shadowing. Two thin coats of light blue spray paint were applied. I tried to match the paint to the blue tape measures. Obviously there were other colors that would have matched the chair equally well. The choice to go with blue was twofold. First, it was my favorite color of all the matching choices of spray paint that Home Depot had. Secondly, I chose not to buy five cans of spray paint to control cost and avoid additional time needed to sample multiple color schemes. Like weaving, the process of painting was mostly linear and driven by practicality rather than design exploration. The paint options that were not purchased or sampled could be considered dead ends or stubs in the design process. Color is a powerful design element that ideally should be given ample attention in any product. Choosing color isn’t always as easy as it may seem, especially when going for a unique and definitive look. For the sake of time in this project, the light blue presented a choice that I felt worked well with the cushions and was not as polarizing the other colors available.

For the back rest, one tape measure could be cut into two halves to create the horizontal bands. Which was lucky because the supply was starting to run low and I wasn’t sure I would be able to find the same tape measures again. It was reassuring to see the number one design constraint – small in size – serving its purpose at this point. The back rest cushion presented a different challenge because it would be visible from all sides. It wasn’t possible to just staple the straps to a bottom surface that would be seldom seen. In order to get a finished look all around, the cushion itself was used as the weaving loom. using the same color pattern as the seat cushion, tape measures were stapled along the bottom edge of the back rest. Then more tape measures were woven in the perpendicular direction, again following the color pattern. To assure that the back of the chair looked finished, complete loops were made from the horizontal bands by attaching the ends together with a small dab of hot glue. Hot glue seemed to work fine for this application,  however after some time in a freezing garage some of the bonds had broken. Which was not a big disaster because the bands were now held in place by a tight weave. The ideal process for covering the back rest would again be sewing a cover specifically for the shape and size of the cushion. The hardest part of this entire project was weaving the last strap around the edge of the back rest. With all other straps firmly secured, this last strap proved challenging to thread in between the layers. Once the last strap was in place, it was stapled to the bottom edge with as few staples as possible, covering all two staples in each vertical band.

The finishing touch was to reassemble the chair. The increased thickness of the cushions made it slightly difficult to squeeze the back rest into its original position between the metal tubing. Also, because the original screw holes were now covered by tape measures, new holes has to be made exactly where the old ones were before the chair could be reassembled.