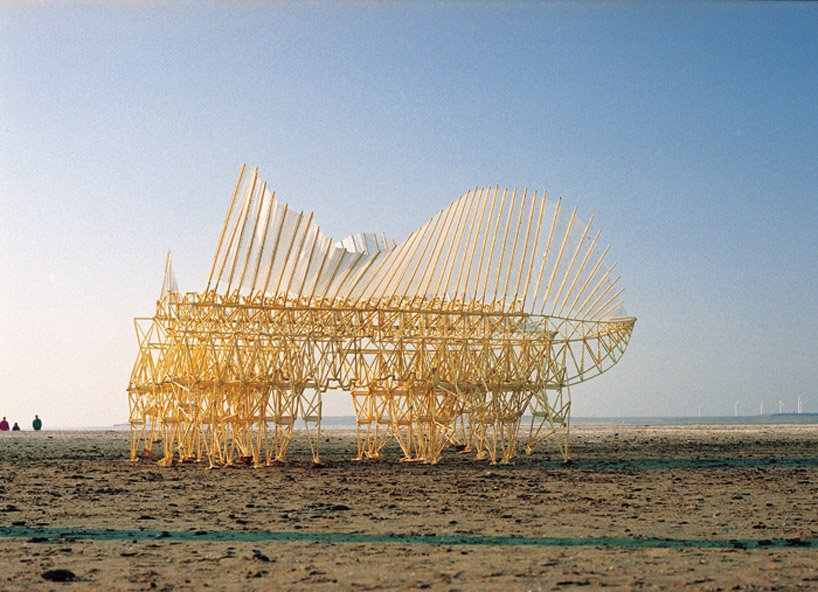 Theo Jansen, a dropout physicist become artist, has created his very own aesthetic. In 1980, Jansen began with 1500 combinations of 11 linkage sizes. Using a new technology at the time, a computer was utilized to dwindle the different configurations down to just one golden combination, the “eleven holy numbers”. These numbers allowed for the most efficient, elegant, and stable motion of what would thereafter become the locomotion of the Strandbeest. Watching his PVC creatures move both invokes curiosity and mesmerizes. They appear to move across the beach eloquently and naturally, making it difficult to remember that these actually aren’t living creatures or an alien from beyond.

Most of his work is done in Ypenburg, Netherlands. Jansen has a small cabin, a shipping container, and a small sandy area to test some of the infantile Strandbeests. As one can imagine, these beasts require exceptional amounts of effort to build. So Jansen does have the occasional associate help him with construction, but these creatures are of his own design.

Trial and error were Janson’s original source of evolution in his walking creatures. Increases in computing power has allowed Jansen to accelerate the advancement of his walking creatures in recent years leading to the large structures you can see him tinkering with today.

The “eleven holy numbers” and Jansen’s design are available for public use. This has allowed for what he considers to be the ability for his creations to multiply (as mentioned earlier). Anyone can build one, and anyone can make it their own. You can even find desktop versions in model kits for purchase of all sorts of varieties.

Theo Jansen has found a way to portray life as an abstract kinetic sculpture. His Strandbeests don’t resemble any life form I have witnessed, yet I find myself imagining these large artificial creatures as having life. I see one fall over and catch myself felling sorry for it… its the strangest thing how the aesthetic Jansen has created can make a person feel empathy for a creature made of PVC, wood, and cloth. To myself, it is mesmerizing both because of the work, science, and engineering as well as the aesthetic, beauty, and awe in his design.

All information was found from:

No photographer or publisher information could be found on the photos, URL sources can be found in captions