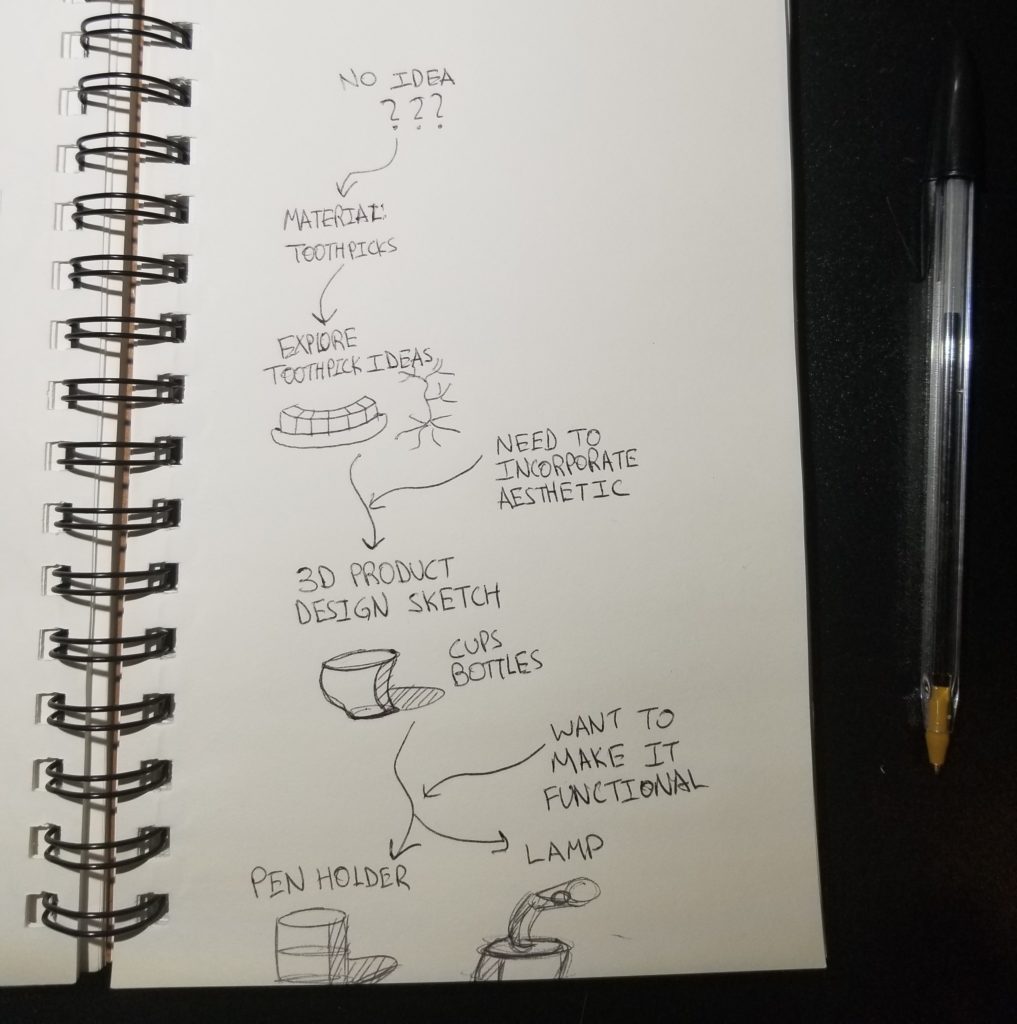 To recap my ideation process so far:

I started out with no idea what I wanted to do. In an in-class sketching brainstorm, I decided to think ideate with toothpicks in mind as a material. I started coming up with ideas related to toothpicks, teeth, icepicks, and trees.

Of the 3, I liked the idea of crooked teeth the best because it was sort of funny to make a set of crooked teeth out of an object meant to help your tooth health. I also thought of trying to make an object that moved in which I came up with a car and a multi-tool. I didn’t love either of these ideas though.

I then reread the assignment and realize that the object had to use an aesthetic that either a classmate or I had researched for the last blog post. This left me at feeling like I just wasted some time with the brainstorm, but then I realized toothpicks would be the perfect material to make a 3D version of a rough design sketch; which was the aesthetic I researched. They would be great for representing the stray lines and use of hashmarks common in early stage design sketching.

From here I began some ideation sketches on different objects I could make, most of which were cups and bottles. Simple, and very common practice sketches.

After some sketching and visualization of the final project, I came to the realization that I wouldn’t want to keep any of these objects if I made them. Yes, it would be cool as an artifact (making a 3D object that is meant to look like a 2D representation of a 3D object) but it would have no usefulness.

I then began thinking about making a functional, useful object with this same aesthetic in mind. So far my ideas for this have been a pen holder, which makes use of the cup/bottle sketches I had came up with earlier, and a lamp. I am currently brainstorming lamp ideas, because I think that would be the most useful and interesting, but I am still planning on looking at some other pathways.

For lamp ideas, I am thinking of making an object out of toothpicks that takes the form of a lamp, but it is made of sketchy lines, and hashed shading. There would then be some simple electronics, with an LED as the bulb. Since the entire lamp would basically be a skeleton I am thinking of creating a cone or a bulb for the LED to create either a diffused light or a focused light. My current leading ideas are the reading light and the sphere light, but I am still brainstorming more.