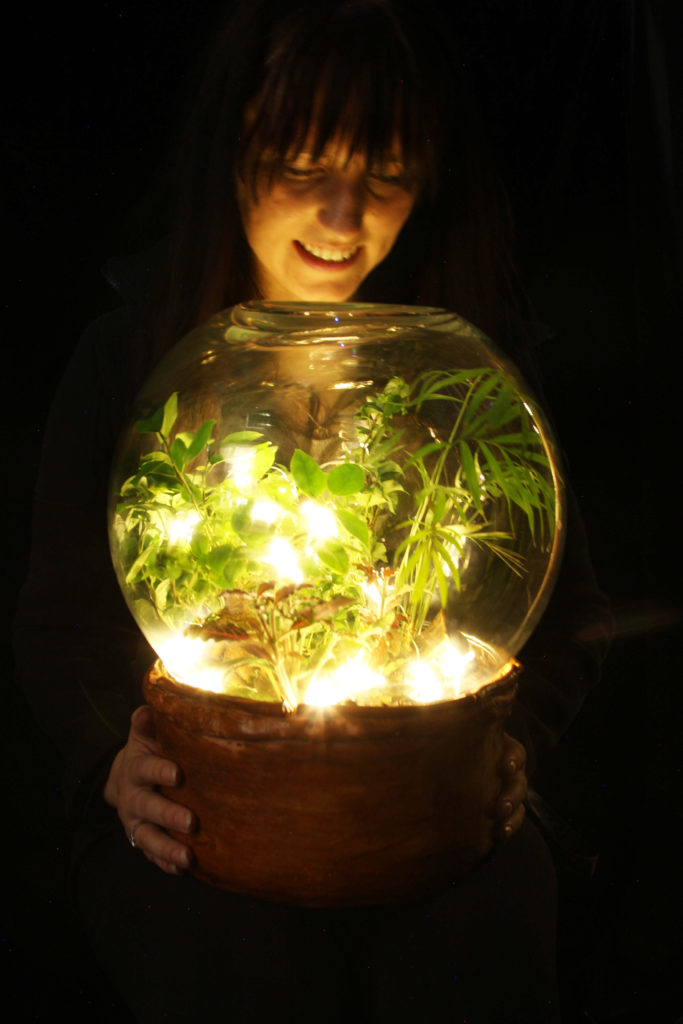 For my final project I created a terrarium in the shape of a snow globe. My initial plan for the base of the terrarium was to have it made of wood or to at least to look like wood. I realized very early on in the design process that this was not going to be possible. Instead I compromised and decided to make the base out of terracotta clay with an aged appearance. The supplies I bought for this project was:

The supplies listed above are shown below in the following two images.

The first step in constructing my terrarium was was making the terracotta base. This was rather difficult because I had never worked with clay before. Originally I wanted to just use the pot, shown below, just as a form of structure when I was modeling the clay. The longer I modeled the clay I realized that I would not be able to remove the pot and have the clay stay in the shape I wanted it to be in or break, so I ended up keeping the pot inside of the clay. This process too k several hours to model and took several days to dry. Images of the process are shown below.

Once the initial base was made and dried I needed to make an upper lip to the pot that could hold the glass bowl on top of the pot and also stick with my aesthetic. I was unsure what shape I was going to use but as I was working with the clay I realized long thin strands gave the best appearance and support for the glass bowl. This step took about an hour to do and several days to dry.Images of the base with the upper lip done are shown below.

After the base was completely made I needed to start giving it the aged appearance I wanted it to have. I had no idea how to give terracotta an aged appearance so I found a couple of ideas on how to do it at [blank] created by [blank]. The idea I found the most interesting from this website was staining the terracotta with wood stain and then coating it with some moss. The process of staining the terracotta with wood stain is shown below. This process took about 30 minutes to complete and it took a couple of hours to dry.

After staining the pot I was finally ready to plant the plants and put the miniature house and pond into the base! This process was very easy and worked out very well. It took approximately 20-30 minutes and added a whole new aesthetic to my project. It was a very exciting step to complete. Images of this step are shown below.

The final presentation for my final project is linked below: